Last year, the head of a bank branch committed suicide by hanging himself in his apartment because his pay was cut after he received a low grade on his job performance evaluation. To restore his lost pay, he needed to achieve targets in various products ranging from deposits to loans to credit cards. In other words, it was the company’s way of letting him go.

“By the end of the day, job performance ratings from first to last are posted within the internal network,” said a bank branch head, who requested anonymity. “If the Korean Peninsula unification was included in the performance target of every bank employee, the two Koreas would have been unified already.

“The phrase ‘performance pressure’ is the condensed reality of the banking industry’s crisis.”

The net interest margin (NIM), an indicator of profitability, is below 2 percent for the first time since 2009 and that means revenue from deposits and loans has eroded.

“Without distinct sources of income other than deposit and loan interest, the banking industry has received a direct hit from the low interest rate,” says Yun Chang-hyun, head of the Korea Institute of Finance. “This is like a situation where they thought every day would be like summer and never prepared a warm coat, but then autumn came and they are now shaking in the cold.”

The simplicity of its business portfolio has put banks in this conundrum. In the case of foreign banks, profit from deposit and loan interest is about half of their total. The other half comes from services like consulting, financial product sales, and alternative banking services such as ATMs and internet banking. In the case of local banks, deposit and loan-interest income accounts for more than half.

A simple look at ATM banking illustrates the problem. 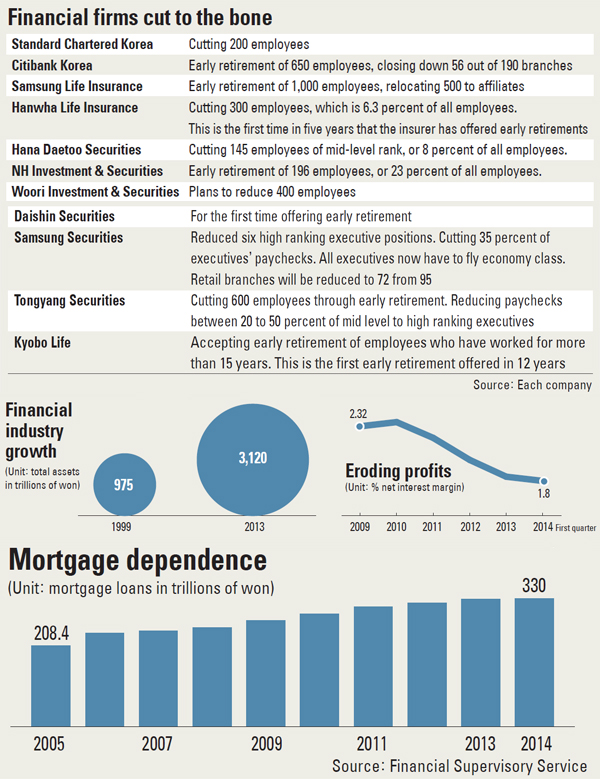 “When considering the cost to lease space, cooling and heating bills, and other management costs, the deficit situation is critical,” said a high-ranking official at a local commercial bank who did not want to be named. “But no banks are willing to step forward and charge a realistic fee for ATM service because they are afraid of the public’s reaction.

“What we did instead was to quietly close ATM machines at locations where leases are particularly expensive, such as Gangnam Station.”

Banks could survive even when the interest rate is low if the number and amount of new loans increase enough. However, as economic growth has been at a near standstill, the loan business has been struggling. This is particularly so as conglomerates are able to generate credit on their own by issuing corporate bonds.

Companies that have enjoyed success in the global market no longer need to knock on the doors of banks. To survive, banks now have to cater to smaller and midsize companies. But since banks have mainly focused their credit business on mortgage loans, their ability to evaluate the creditworthiness of small-business customers has slipped.

“Local banks have been avoiding corporate finance after going through the financial crisis of the late 1990s,” says Yun of the KIF. “Instead, they have focused too much on the real estate market, which was an easy way to make money. Banks lost the opportunity to build up their expertise. And as it was difficult to determine which companies would succeed, they started to only make loans to blue-chip companies. Therefore, it created a new problem of an uneven distribution of loans even among small and midsize companies.”

Experts say banks’ inability to evaluate businesses is one reason they are hesitant to make no-collateral, high-interest loans.

Equipped with appropriate evaluation skills, such loans can be highly profitable.

“Because it is difficult to tell who will be able to pay back the principal, it is essential to make the appropriate evaluation,” says Yun. “However, since local banks don’t want to be criticized for running a loan shark business, even when the interest rate is low they choose those who are certain to repay the loan or who have collateral.”

Since banks are focused on running a low-risk business, their strategy is to expand assets, which results in an earning structure where the interest they pay on deposits is high and the interest they receive for making loans is small.

In order to secure better profitability, banks need to cut costs. But even this isn’t easy because of intense opposition from labor unions. Citibank and Standard Chartered have been reducing their business in Korea largely because of high employee salaries.

Banks also face competition from the IT industry.

KakaoTalk in the second half of the year plans to introduce a service where users can transfer up to 100,000 won daily.

Finally, financial services provided by social networking companies are considered a new revolution in the financial industry, and the advance of technology is likely to eat into the profits of banks.

“The most interesting field that software companies are developing is the mobile pay system,” says Park Yong-hu, PYH CEO. “The prediction of Bill Gates - ‘banking is essential, banks are not’ - is becoming reality.”

The situation is eroding the morale of bankers, which leads to breaches like the illegal loan giveaway at the Tokyo branch of KB Kookmin Bank, the financial industry’s biggest personal data leak ever and the KT ENS loan fraud that involved bank employees.

In November, a KB Kookmin Bank employee embezzled 11 billion won, while in April, another employee reportedly issued a false deposit confirmation note to a real estate developer worth 1 trillion won.

“As the future became uncertain, the morality and loyalty of the organization are falling and the idea of making a quick buck is surfacing,” says Yun of the KIF. “As the banking industry crisis leads up to a crisis of public trust, it will boomerang and negatively influence the nation’s economy.”