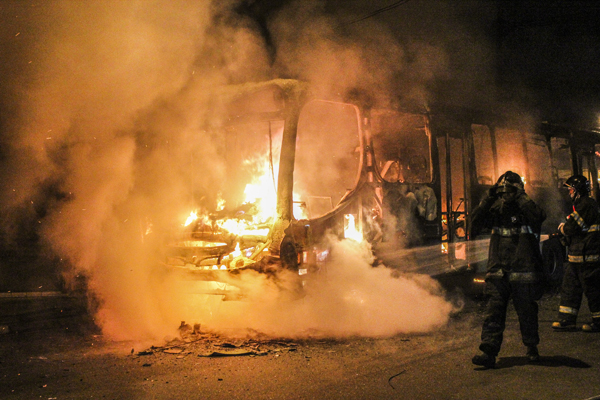 Firemen quell the blaze in a bus that was set on fire by vandals after a semifinal match between Brazil and Germany in the 2014 FIFA World Cup in Sao Paulo on Tuesday. [XINHUA/NEWSIS]

Germany inflicted the most shocking result in World Cup history when they crushed hosts Brazil 7-1 in a semi-final that brought grief to millions of home fans and caused utter astonishment around the world on Tuesday.

The inspired Germans scored five goals in 18 first-half minutes to rewrite the record books as Brazil’s defense caved in to leave their dreams of a sixth world title in tatters.

It was Brazil’s record World Cup defeat, their first at home in 64 competitive matches since 1975 and was the first time they had lost by six goals in any match since Uruguay beat them 6-0 in the Copa America in 1920.

It was also the biggest ever victory in a World Cup semifinal and German striker Miroslav Klose became the tournament’s highest scorer of all time with his 16th World Cup goal to move one clear of Brazilian Ronaldo.

The only survivor in either squad from the 2002 World Cup final when Brazil beat Germany in Yokohama, the 36-year-old Klose can add to that record when Germany aim to become world champions for the fourth time against Argentina or the Netherlands in Rio de Janeiro on Sunday.

The defeat ended Brazil’s dreams of winning a first World Cup on home soil to bury the ghost of their 1950 final defeat by Uruguay, which entered Brazilian culture as the “Maracanazo” the tragedy of the Maracana.

This defeat can just as easily be described as the “Mineirazo,” although this humiliation was far worse.

After a brief 10-minute spell when Brazil looked dangerous down the left flank, they began wobbling when Thomas Mueller opened the scoring after 11 minutes when he stole away from his marker David Luiz and volleyed home. 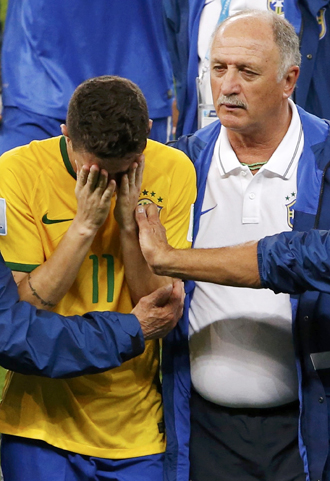 Brazil’s Oscar is comforted by Coach Luiz Felipe Scolari after they lost against Germany. [REUTERS/NEWS1]

Brazil, without injured forward and talisman Neymar but more importantly defender and captain Thiago Silva at the back, wilted.

“I guess it was a very impressive match and I think from the first minute we had the impression something was possible,” Germany’s man of the match Toni Kroos told reporters after scoring two goals.

“It’s hard to believe we were 5-0 up so quickly, but I was there, I know what happened. It is obvious to us that we delivered a marvelous performance. If somebody had said before we were going to win 7-1 I would not have believed them. We’re not world champions yet. This was the feeling in the dressing room.”

Many fans at Copacabana Beach, who had been happily singing and dancing with excitement before the game, left before halftime, traumatized by what had just unfolded.

In Germany, the celebrations were in full swing, with hundreds of thousands of people flocking to the avenue stretching from the Brandenburg Gate to the golden statue-topped Victory Column.

Organizers extended the fan zone to 1.3 kilometers (0.8 miles) in anticipation of the massive crowd who roared with excitement as each goal was banged into the Brazilian net.

“Five goals in 18 minutes. It’s clear that they were shocked and didn’t know what to do,” Germany Coach Joachim Loew said.

“We played well in the first half obviously. But it continues. We need to be humble. We don’t want to overvalue this.”

Germany’s win came exactly 24 years to the day since their last World Cup win in 1990, when they beat Argentina in the final. They lost to Brazil in the 2002 final and were knocked out in the semifinals when they hosted the tournament in 2006.

“We had great hopes in 2006, too, and you can feel the pressure that the hosts have in a match like this,” said Loew.

Brazil defender Davis Luiz was in tears after the game.

“I just wanted to make my people happy,” Luiz said. “Unfortunately, we couldn’t. I’m sorry, I’m sorry to all Brazilians, I just wanted to see them smile, everyone knows how important it was.

“They were the best, they prepared better, they played better, we let in four goals in six minutes. It is a very sad day and we we’ll learn from it.”

The German fans were still in the Mineirao more than an hour after the match ended, cheering and raising the level when the German players came out to greet them.

No one had predicted such a scoreline.

After Mueller gave them the lead, however, the floodgates rapidly opened with four goals in six minutes.

Klose made it 2-0 in the 23rd minute with his record-breaking goal after smacking in a rebound off goalkeeper Julio Cesar, Kroos scored with a sweet shot and the midfielder struck again to make it 4-0. Sami Khedira added the fifth before halftime after a smart one-two with Mesut Ozil.