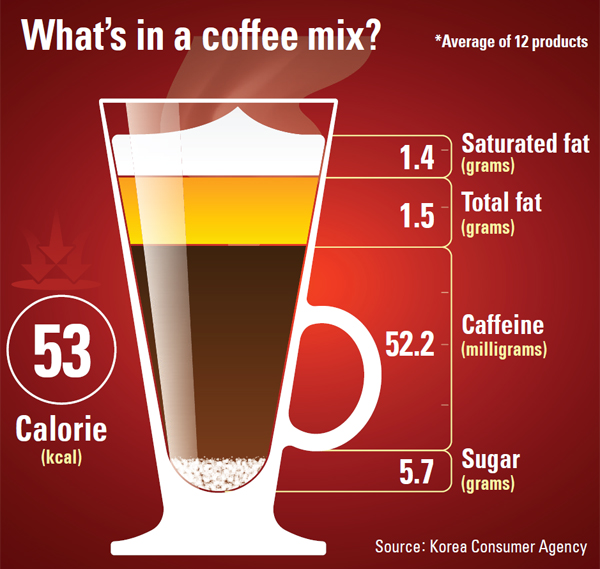 Two cups of instant coffee mix contain 30 percent of the maximum daily amount of sugar recommended by the World Health Organization, according to a Korea Consumer Agency study released yesterday.

The agency said a coffee stick contains about 12 grams (0.4 ounces) of mix, including about 5.7 grams of sugar.

Although coffee mixes are popular with Korean consumers, the agency said there hasn’t been a study of the contents of such products, event though they contain high levels of sugar and caffeine.

The 12 coffee-mix products analyzed - including Nescafe Supremo, Maxim Arabica and French Cafe - were selected from among 100 mixes on the market. The agency selected the best-selling products after conducting a popularity survey of 1,000 consumers aged 19 to 69 from Dec. 19-30.

The study also showed the amount of caffeine content in a stick mix varies by product, with the average being 52.2 milligrams. The product with the most caffeine was E-Mart’s Starmix Mocha Gold (77.2 milligrams), while the mix with the least amount was Maxim White Gold with 40.9 milligrams. Considering that the recommended caffeine amount by the government is 400 milligrams per day or less, two cups of Starmix Mocha Gold would contain about 40 percent of the total.

“Coffee-mix products are processed foods that have a big impact on a person’s daily consumption of sugar and caffeine, but there have been no related indications of the amounts on the packaging,” said an official from the Korea Consumer Agency. “It is urgent that [coffee-mix manufacturers] clearly state the substances, including how much caffeine and sugar they contain so consumers do not exceed the recommended limits.”