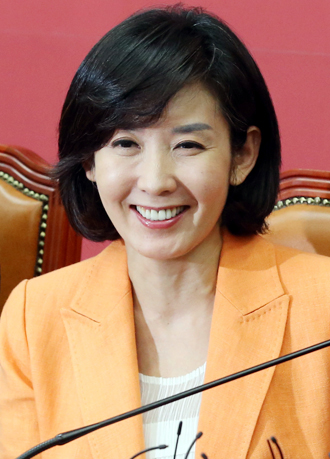 Na Kyung-won, a high-profile, ruling party politician who lost in the 2011 Seoul mayoral race, declared her bid to run in the Dongjak B District for the July 30 by-elections, in which she will be competing with an opposition rival close to Seoul Mayor Park Won-soon.

The Saenuri Party leadership yesterday told reporters that Na decided to “follow the will of the party,” while the ruling party was struggling to find a high-profile person for the most-contested constituency among the 15 seats in the upcoming race.

The ruling party is expected to register her as its official candidate soon: The two-day registration period begins today.

Na, 51, is a judge turned politician and a graduate of Seoul National University Law School. She is also a two-term lawmaker, and won the 18th National Assembly elections in Jung District, central Seoul, in 2008, as well as a proportional seat in 2004.

She also ran in the Seoul mayoral by-election in October 2011, but was defeated by opposition candidate, Park Won-soon, a civic activist and an independent candidate endorsed by Ahn Cheol-soo, who was a rising political superstar at the time.

Na was scrutinized for her membership at a luxury beauty salon at the time, while Park appealed with his image as a humble and diligent civic activist and lawyer. Park beat her by a significant margin, 53.4 percent to 46.2 percent.

The Dongjak B District is the only seat being contested in the capital for the July 30 by-elections. Located in southwestern Seoul, the constituency is known to be more supportive of liberal candidates, even though Chung Mong-joon, another high-profile politician in the ruling party, won the seat in the past two elections in 2008 and 2012.

Chung gave up his seat in Dongjak B District to run in this year’s mayoral election.

The Saenuri Party had difficulties finding a suitable contender for the race, in which Mayor Park overpowered Chung by a large margin in the district.

The largest opposition New Politics Alliance for Democracy has already announced its decision to nominate Ki Dong-min, a former deputy Seoul mayor and a close aide to Mayor Park, despite protests from other members.

However, political observers believe the Dongjak race will become an intense competition between Mayor Park and Na once again.

Na’s decision to run in the race, despite the mayor’s high popularity, came after a rift emerged in the NPAD over Ki’s nomination.

Heo Dong-min, an NPAD member who applied for the nomination for Dongjak B District, protested the party leadership’s decision, staging a sit-in at the same time as a press conference given by Ki, who was confirming his acceptance speech. Heo proceeded with his protest at the NPAD leadership’s office in Yeouido, western Seoul, demanding they retract Ki’s nomination.

Roh Hoe-chan, a high-profile liberal activist and a former lawmaker of the opposition Justice Party, also announced on Tuesday that he would run in the district and criticized the NPAD’s internal conflict over its nomination.