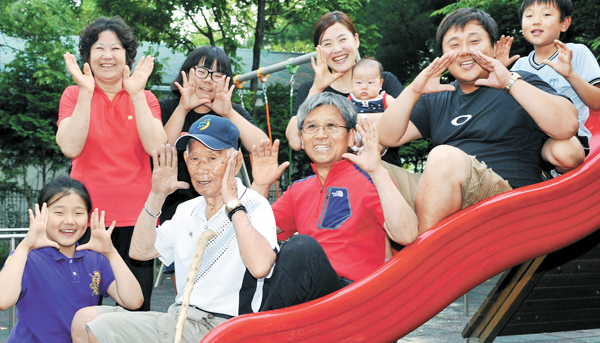 Choi Jong-deok, 96, second from left in the front row, poses for a photo with four generations of his family at a playground near his apartment in Seo District, Daejeon. By Kim Seong-tae

In an aging Korean society, it is becoming more common for older adults to take care of their elderly parents.

Though the record is based on family registers ? which means they could reside separately ?the number of older adults who are supporting their parents is expected to still be significant and likely to increase in the future.

According to Statistics Korea, there are 10,615 four-generation families nationwide. It estimated that the figure would decrease to less than half in 2035, but the number of families whose oldest member is 85 years and older is expected to increase from 261 in 2014, to 458 in 2035.

“If the oldest family member is 85 or above, we can say they are being supported by their children, who are likely to be in their 60s,” said a Statistics Korea official.

Reporters from the JoongAng Ilbo met several such families to hear their stories. While some were enthusiastic about their multi-generational homes, other adults felt stuck between their parents and their own children, as well as the stresses it brought.

In Daejeon, Choi Ho-bung, 65, has cared for his parents for the past 20 years.

“He looks handsome, just like me,” laughed Choi Jong-deok, 96, looking at his 3-month-old great-grandson. His eyes wrinkled as he smiled, but the baby had eyes and a nose just like him - genes passed down for nearly a century.

The 65-year-old started looking after his parent two decades ago, after he started his own gas station and his life stabilized. His mother passed away from a heart attack nine years ago, and in 2011, his son Choi Seok-geun, 35, moved in with his family after he launched a restaurant in Daejeon, which is how four generations came to live under one roof.

Ho-bung and his wife Shin Myeong-hwa, 61, are grandparents now, with seven grandsons and granddaughters, but they can hardly act like adults, and must behave in front of the family’s 96-year-old patriarch. After all, Ho-bung is still a son who takes care of his father.

“People often ask me whether I feel uncomfortable living with him,” he said. “But it’s because they haven’t experienced it. I’m so happy that we can all share our love together.”

For others, though, the custom of adult children taking care of their aging parents has continued generation after generation.

Lee Hee-geon, 62, and his wife Lee Sang-ja, 59, who live in Yongsan District, central Seoul, say they enjoy taking care of Lee’s mother, Chae Sun-im, 101. Lee and his wife always take her with them when they venture outside their home, even sometimes to social gatherings.

Lee’s second son and his fiance have already volunteered to them and his grandmother after they marry in September. Lee eventually dissuaded him, but he admitted he was pleased by the offer. “These days, young people don’t even joke about it,” he said. “We were glad because it felt like he had learned from us.”

In the town where Lee resides, there are many seniors living alone, mostly in small dwellings with a room and a kitchen. Many also rarely fraternize with their neighbors due to financial burdens.

“In fact, they all have children who are living financially just fine,” Lee said. “It makes me a little said that [the tradition of] taking care of aging parents is dying out.”

These days, the notion that the eldest son must take care of his parents is considered outdated. Instead, sons and daughters take turns in many cases, which lessens complications for the adult children and gives elderly parents the opportunity to see or live with all their offspring.

Kim Sun-yeon, 97, has many homes, for instance. Her base is in Dongjak District, southwestern Seoul, with her eldest son, 70-year-old Jeon Jeong-hwan. She rotates going to the residences of her six other children. When she gets homesick, she goes to her other son’s house in her hometown. And when it gets cold in the winter, she goes to one of her daughters’ houses in Daegu, known to be the warmest city in Korea.

“When I get older, I want live with my children just like my mother does now,” Jeon said.

But in some cases in which the medical conditions of elderly parents compound living conditions and care, adult children opt to live nearby.

Mrs. Park, 62, lives near an elderly care hospital in Uljin County, North Gyeongsang, where her 89-year-old mother-in-law is staying.

She and her husband nursed the octogenarian at their home in Seoul after she suffered a stroke, but Park couldn’t continue to support her after she herself had surgeries on her thyroid and back.

So the couple decided to send Park’s mother-in-law to the care hospital and moved to the same town, where they can visit her more often than they did in Seoul. The hospital bills in the remote town are also cheaper. “My mother-in-law and I got along better as I visited her more often here,” Park said. “Even though I can’t care for her at home, she and I both are satisfied.”

While living with aged parents can be beneficial for some gray-haired sons and daughters, it can be a significant burden on others, not only because of the generational gap, but also because of the physical, mental and financial stressors.

Those in their 60s are considered a generation stuck between their parents and their own children, and many have lived their lives supporting both.

“I have to take care of my 2-year-old grandson and my mother-in-law at the same time,” she said. “When I get tired, I sometimes feel sorry for myself that I have to do this at my age.”

The middle generation may also be hindered in planning for their own later years in caring for both younger and older sides. If they don’t receive a pension, then their most likely option is to spend the money they saved in their youths little by little.

“Those in their 60s are the generation who retired without systematic preparation [for their later years],” the report said. “The financial burden on that generation has worsened because more children are relying on them as the economy slowly recovers.”

Making matters worse, many adult sons and daughters no longer have a source of income, and nearly all elderly parents suffer from at least one chronic condition that bring in massive hospital bills. According to Health Insurance Statistics 2013, monthly medical spending was 375,000 won among those 80 or older, the highest among all age groups and 4.5 times the average of the entire population.

Aging adult children may also have their own maladies and be too weak to support their parents.

Mrs. Choi, a 66-year-old living in Gangseo District, western Seoul, recently had surgery for a herniated spinal disk. She has taken care of her 86-year-old mother-in-law, who suffers from severe diabetes, for more than 30 years, while Choi’s back grew increasingly worse.

“I think last year was my limit,” she said. “I know it’s bad, but sometimes I hope she dies soon.”

Such predicaments have caused tension among brothers and sisters, and can even lead to tragic incidents. There have been already two parricide cases this year. In one instance, the Pocheon Police Precinct in Gyeonggi arrested a 57-year-old man for allegedly killing his 56-year-old sister over a domestic dispute about caring for their parents.

Senior citizens taking care of their parents may even serve as a negative force in the economy as inheritances are postponed. For example, “Japanese seniors in their 60s, and older generations, own 70 percent of all financial assets, but they don’t spend them, nor do their hand them to their children because they don’t know what will happen for the rest of their lives,” said Kim Dong-yeop, a director at the Mirae Asset Retirement Institute.

He added, “If elderly parents give that money to their children at the age of 90, then the children possess it until they become that age, which means the money never goes to the young people. The economy also slows down because those who have money rarely spend or invest it.”

The downsides of caring for elderly parents highlights the need for reforms in this rapidly changing society, experts say, as well as more alternatives for caregivers. This is especially true in an age when “seniors are increasingly living like neighbors with their [elderly] parents,” said Choi Sung-jae, the former presidential secretary of employment and welfare.

“Rather than making individuals care for their elderly parents, authorities should come up with new policies to help them,” said Lee Yun-gyeong, a researcher at the Korea Institute for Health and Social Affairs. “The realistic form of family in the future is ‘loose but intimate,’ in which authorities help individuals with nursing and care, and relatives focus on providing emotional support.”

Kim Gyeong-min, a politics and diplomacy professor of the Hanyang University, as well as Professor Lee Sang-yong, from Woosong University, both agreed that financial aid should be allotted to care-giving children according to the trends. “There should be customized policies for each age group such as giving more support when people at the age of 65 or older are taking care of their parents,” Kim said.

“Otherwise,” Lee added, “it will make [older adult] children suffer too much.”