Installation takes visitors to the clouds

Installation takes visitors to the clouds 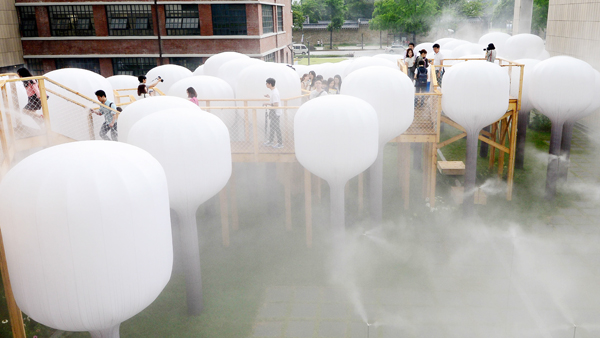 Are those giant mushrooms or white clouds? The question is bound to pop into the minds of those who walk past the National Museum of Modern and Contemporary Art (MMCA) in central Seoul, where a curious installation is temporarily situated.

The piece “Shinseon Play” has grouped together 60 air balloons reaching up to 16 feet and spanning six feet in width.

The objects create a shadow, protecting viewers from the scorching sun. Taking a stroll through them is like walking in a forest full of tall fungi.

From the top of the wooden stairs, the mushrooms look like a gathering of cumulonimbus clouds. The suspension bridge sprays cool water, as if to chase away the summer heat.

In that magical moment, it’s not hard to realize why this installation is called “Shinseon Play.” Shinseon refers to mythical East Asian gods who were believed to live and play in the clouds.

With the view of Mount Inwang ahead, the installation provides a quick escape from busy city life and allows visitors to play like the gods in the Korean myth.

If walking is too boring, why not try jumping? “Shinseon Play” has two trampolines for visitors to bounce on, playing on the poetic idea of reaching the sky.

The installation was created by the architectural team Moon Ji Bang, which comprises of three members - Choi Jang-won, Park Cheon-kang and Kwon Kyung-min. They make up the winners of the first Korean edition of the Young Architects Program (YAP) by the Museum of Modern Art in New York.

The Korean edition is co-hosted by Hyundai Card and the MMCA.

“The work was selected as the winning project for its clear understanding and creative interpretation of the theme ‘Shade, Shelter, Water’ and realistically incorporating the historical background of the museum in relation to Gyeongbok Palace,” said Park Keun-tae, a curator of the MMCA.

YAP, an annual competition hosted by MoMA PS1 and the Museum of Modern Art, started in 1998 with the goal of discovering young architects and providing them a platform to share their works. YAP took a global turn when it expanded to Chile, Italy and Turkey in 2010.

Seoul’s YAP consists of two parts: a display of the program’s history and the designs of the participating teams, and the “Shinseon Play” installation.

Each team had to deal with a theme related to preserving nature, such as “reuse, recycle,” and Moon Ji Bang was no exception.

“We dealt with the theme of preserving nature in a rather simple way,” said Choi Jang-won. “Concrete blocks were replaced with grass for this installation, and cloud-like air balloons naturally provided shade.”

The chance to play god in this fun and refreshing installation is available until Oct. 5. The museum is closed on Mondays.