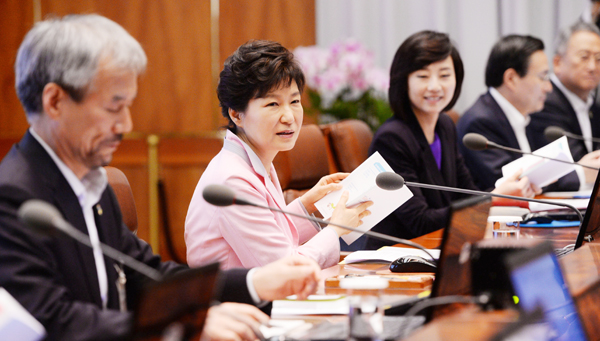 President Park Geun-hye presides over a meeting with her senior secretaries at the Blue House last week. [JoongAng Ilbo]

In the winter of 1978-1979, a series of public union strikes left British society in chaos, causing great inconvenience to the citizens. It was known as the “winter of discontent.” When then-Prime Minister James Callaghan returned from an overseas visit, reporters at the airport asked him about the domestic situation.

He told the press that the situation was not very serious but that the media was making a big deal out of it. The next day, The Sun ran the headline, “Crisis? What Crisis?” The now famous line points out how out of touch Callaghan was with the majority of society. In the May election, the Labour Party lost to the Conservative Party led by Margaret Thatcher.

In a recent opinion poll, President Park’s rating was more negative than positive, and the approval rating for the president was lower than that of the Saenuri Party. The plummeting popularity certainly reflects her appointment decisions, a series of failed nominations and reappointment of the Prime Minister who had resigned. But more fundamentally, many citizens feel that the president’s awareness and response are out of touch from reality. It is unclear if the president understands the shock that the citizens suffered from the Sewol ferry disaster, or if she finds the current situation a crisis. She has grown so distant that she had to prove her sincerity by shedding tears.

The Sewol ferry incident has become a milestone event for Korean society, giving tremendous shock and despair to the citizens. In the last few decades, Koreans have grown proud of economic growth and democratization. However, the Sewol ferry tragedy made us think about where we are now and gave us a painful lesson that we must change for a better future. The rushed, expedited way of life showed its limits, and efficiency and growth are no longer the highest values.

Moreover, state-led reform and initiatives cannot change society. Then, where should we go and how? It is a question that the Sewol ferry incident asks of Korean society.

It is a difficult question, but it is the president’s duty to seek the answer, more so than anyone else. The public can see how much the president is thinking from the people she chooses to work with and the visions she proposes.

But, at least for now, we haven’t seen her recognize the dire seriousness of the situation. The public was greatly disappointed when she decided to keep Chung Hong-won as prime minister after he tendered his resignation, at a time when the nation is in desperate need of change.

“National rebuilding” seems to be President Park’s answer to the questions raised by the Sewol ferry incident. However, she hasn’t mentioned any specific direction beyond the general need for national reform and failed to explain where society should be headed through this reform.

Moreover, Korean society has become more diverse and expansive than in the past, and it is doubtful that the president alone, or the government - which revealed its limits in the aftermath of the Sewol ferry incident - can handle the grand task of national reinvention. That’s why President Park’s “national renovation” sounds like an empty slogan.

Despite the chaos, her administration is not much different from British Prime Minister Callaghan’s laid-back response, “Crisis? What Crisis?”

Just as her plummeting approval ratings show, many citizens feel that she does not understand the situation or underestimates the scope of the crisis. The main reason is that President Park remains in a closed space instead of going out onto the streets. Rather than meeting different people and listening to various opinions, she relies on the views and advice of a few aides who are personally close to her. Therefore, she has little empathy with Korea’s citizenry.

The current situation is a crisis for President Park as well. She is desperately in need of a more open national administration and for a politics of empathy and understanding.