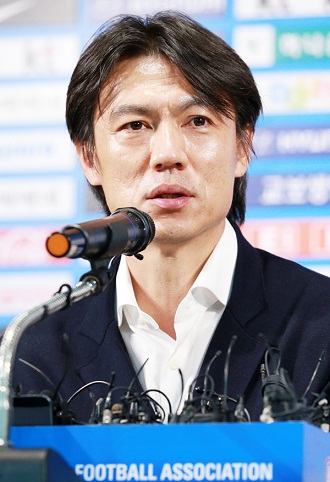 Hong Myung-bo announces his resignation as head coach of the Korean national football team yesterday at a press conference at the KFA’s headquarters in Jongno District, Seoul. [NEWS1]

The Korea Football Association (KFA) has inadvertently ended the career of one of the most young and promising football coaches the country has ever seen.

A week ago, the KFA said that it had decided to keep Coach Hong Myung-bo until after January’s Asian Cup despite a disappointing result at the 2014 Brazil World Cup, in which Korea was eliminated in the first round with a record of one draw and two losses. But Hong announced yesterday that he is resigning from the post because he is accountable for the poor outcome of the event.

Yesterday probably set a precedent for the number of the times KFA officials said “I’m so sorry” in the last decade. Huh Jung-moo, vice president of the football governing body, also resigned after apologizing to the nation.

Huh announced a week ago that the KFA still trusts the coach, which threw KFA chief Chung Mong-gyu into severe public criticism because he had made no comment about the team’s performance. He also apologized to the nation yesterday.

At 10 a.m. at the KFA’s headquarters in Jongno District, central Seoul, Hong began a press conference by sharing his feelings about the tournament in Brazil.

“Before the event, I said I hoped the team can bring some hope to the country that has gone through many sad incidents recently, but I wasn’t able to keep that promise,” he said. “I prepared for the event with my best, but it didn’t turn out well, so I think this is it. Today, I’m resigning from the coaching post and decided to leave a football team that I have been working with for 24 years since I became a national team player for the first time in 1990.”

“I realized that I’m incapable of running this team,” he said.

“I was unprepared and failed to develop a strong squad. But since KFA chief Chung persuaded me to stay with the team, I thought about continuing coaching because the team is having the toughest time ever, but I decided not to.

“I could have said that I’m quitting when I had a press conference at Incheon [International] Airport when we returned from Brazil and that might have helped me avoid all the criticism, but I just didn’t want to do that because I wanted to apologize to the nation more appropriately.”

After the KFA announced last week that Hong will continue coaching the team, some media outlets started digging into his private affairs.

One reported earlier this week that Hong was looking into purchasing land in Pangyo, a newly developed luxury residential complex in southern Gyeonggi, about a week before he announced his 23-man World Cup roster. The report added that he left the National Training Center in Paju, where the national team works out in northern Gyeonggi, during training to go check out the property.

In Western nations, a person’s private affairs might not be a big issue, but in Korea, when someone takes on a huge role, especially representing the country, personal dealings become extremely significant.

The report poured oil on the fire for Hong, as many football fans claimed that he had become distracted by his private life instead of focusing on developing a competitive team for the world’s biggest football stage. The KFA and Hong denied the report.

“It is true that I was considering purchasing it,” he said. “But the report that said I went there during training time isn’t true. I haven’t been living my life in a cowardly way like that.”

For better or for worse, the Korean national team is left without its leader and all responsibility falls on the KFA, which has been running the team with no clear plan. In December 2011, the KFA fired Coach Cho Kwang-rae after the team lost 2-1 to Lebanon in November and then appointed Jeonbuk Hyundai Motors Coach Choi Kang-hee, who consistently told fans, media outlets and the KFA that he wasn’t interested in running the team.

At the time, he said he is the type of coach who was more suited to running a club team rather than the national team. But since the KFA could not find an alternative, it begged Choi to take the job, and he agreed on one condition - that he could lead the team only until the Asian qualifying rounds were over, which the KFA accepted. So Choi became the only coach in the history of Korean football who would lead the national team on the condition of not going to the World Cup.

When Hong was offered the job after Choi, he also said it was too early for him to take the position, but he was the only available option and the KFA persuaded him.

As promised, Choi resigned from the post after Korea clinched a spot in the World Cup in June last year, about a year before the event.

“I strongly felt that one year was too short to develop a World Cup squad,” Hong said yesterday. “I didn’t have enough time to select new faces because I had to develop a team in a short period of time, and that’s why I had to stick with familiar faces.”

When Hong became coach, he chose striker Park Chu-young and defender Yoon Suk-young for the team. He expected them to get into better shape, but Park finished the event with only one attempt on goal in two matches, and Yoon also disappointed.

The team’s technical committee, led by Hwangbo Kwan, which is supposed to provide tactics and analyze opponents’ abilities, proved completely useless since the team was walloped by opponents tactically in all of its World Cup matches. The committee failed to find any new players for the national team in the past four years.

After Hong’s press conference, KFA Vice President Huh suddenly stepped up to the podium and then delivered more unexpected news.

“As a person who was in charge of the World Cup, I also announce my resignation today,” Huh said. “We apologize to the nation once again, but I ask you to support Korean football just like you have been.”

The surprises continued as KFA chief Chung, who hadn’t said a word to the media since the Cup, apologized.

“I’m very sorry for such a poor outcome in the event,” Chung said. “We will try to reform the team and the KFA organization as soon as possible and will try to bring in someone who can lead the team well.”

“The KFA just ruined the career of one of the nation’s best young and talented football coaches by giving him that job too early,” football analyst Shin Mun-sun said. “This should be a serious wake-up call for them.”

There are rumors that FC Seoul Coach Choi Yong-soo and Pohang Steelers Coach Hwang Sun-hong could be considered to lead the national team, but since the public has little faith in Korean coaches, the KFA might bring in a foreign coach.

“We will first reshuffle the technical committee first and then start looking into what kinds of options we have for the coach post,” a spokesman for the football governing body said.