BOK freezes interest rate but maybe not for long

BOK freezes interest rate but maybe not for long 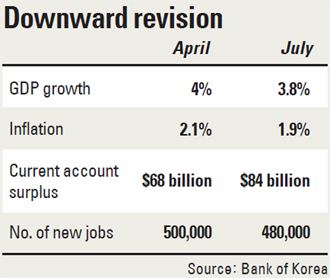 But it lowered its outlook for economic growth for the year from 4 percent to 3.8 percent and Bank of Korea Governor Lee Ju-yeol hinted that an interest rate cut could be coming.

“The risks that the economy could head southward have grown,” the governor said yesterday in comments to reporters.

Lee said the economic impact of the Sewol ferry tragedy in April, which killed almost 300 people, was much more severe than anyone expected.

“In April, we considered risks from overseas much greater [than risks from the domestic market],” he said. “But since the Sewol incident, the impact has extended much longer than we expected. Our views on the economy have changed from three months ago.”

Lee’s comment was viewed by the market as a possibility of a rate cut in coming months, as it differentiates from his earlier comments.

Since Lee was appointed by the Blue House to head the nation’s central bank, the market expected him to tighten monetary policy by raising the key interest rate.

In May, Lee stressed that unlike his predecessor Kim Joong-soo, who gave mixed signals on monetary policy direction, he would give clear signs two to three months prior to any changes. He also said the interest rate would likely be raised if the economy continued to improve as expected.

He later backtracked a bit by saying he didn’t expect an immediate discussion of raising interest rates but was just setting the appropriate foundations for policy direction.

The market interpreted his comment as meaning a tightening of monetary policy could come as early as the third quarter.

Lee softened up further last month when the monetary policy committee held the key interest rate frozen, but he still seemed reluctant to lowering it.

Lee said last month that he needs to look at the overall changes in the economy since the BOK’s last outlook was released in April. However, he said he believed the 2.5 percent interest rate was sufficient to boost the economy.

His position seemed to have evolved yesterday as he repeatedly stressed that the risks of slower economic growth have grown.

His change in view seemed to have been triggered by the revised outlook for growth this year, hurt by consumers’ reaction to the Sewol sinking and a strong won that is hurting top exporters like Samsung Electronics and Hyundai Motor.

The central bank yesterday lowered its outlook for this year’s economic growth from 4 percent to 3.8 percent, as was predicted by the market.

The central bank in a statement said that second-quarter growth slowed largely as a result of the Sewol accident. It projected that the economy will gradually pick up from the third quarter, but noted that a prolonged withdrawal of consumer spending and corporate investment as well as the strengthening of the won may dampen growth.

It also revised its prediction for inflation for the year from its previous 2.1 percent to 1.9 percent.

There have been growing pressures from business and political circles on the central bank to lower interest rates, as it became evident the economy was struggling to reach the central bank’s goal of 4 percent growth.

The nomination of former Saenuri politician and knowledge economy minister, Choi Kyung-hwan, as the new finance minister by the Blue House signaled strong support for propping up the economy. Choi is known to believe in boosting the economy by any possible means.

During a National Assembly confirmation hearing on his nomination earlier this week, Choi hinted at the use of a supplementary budget to revive the economy.

“It looks as if a supplementary budget should have been used when simply looking at the current economic situation,” Choi said Tuesday during his nomination hearing.

Analysts say a supplementary budget cannot work on its own without an accompanying interest rate cut.

Comments by central bank Governor Lee yesterday about strengthening cooperation with the central government further supported speculation that a rate cut was on the cards in the near future.

“I don’t think there’s much difference in the way we see the economy,” Lee said, referring to newly appointed Finance Minister Choi.

“Mutual policy cooperation has to be understood in the sense that each side has to be committed to its own role but also coordinate [with other institutions] so that the overall policy effect [on the economy] can be maximized,” he continued. “There is a need to narrow the differences and share each other’s view as both the government and the central bank are institutions that are responsible for macroeconomic policies.”

The bond market has already been leaning toward a possible rate cut as pressure has been mounting on the BOK.

Interest on three-year treasuries, which was hovering around 2.8 and 2.9 percent earlier this year, has shifted downward to 2.6 percent lately as investors believe a 0.25 percentage point cut of the key interest rate is imminent.

However, there are some doubts on the impact of a rate cut. In May 2013, the central bank lowered the key interest rate from 2.75 percent to 2.5 percent after being pressured by the central government to support its economic stimulus campaign. Then-BOK Governor Kim Choong-soo repeatedly told reporters that benefits from the lower rate would surface as early as a year, or at least after 18 months. Although the economy was able to reach last year’s goal of 3 percent growth, it was still considered weak.

The central bank yesterday held the nation’s key rate at 2.5 percent for the 14th consecutive month. The governor said the decision was not unanimous as one of the committee members did not agree. But when asked if that member favored lowering the interest rate, Lee refused to answer.

In the last 13 months, the decision on the monetary policy rate was unanimous.