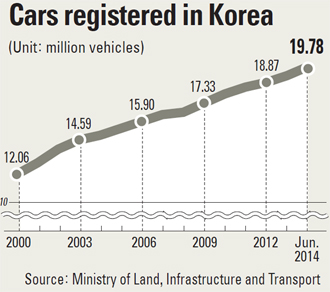 The number of vehicles registered in Korea will surpass 20 million this year, the government said yesterday.

According to data released by the Ministry of Land, Infrastructure and Transport, there were 19,779,582 cars registered in Korea as of the end of last month, which is 2 percent, or 379,000 vehicles, higher than the end of last year. It also means there is one vehicle for every 2.59 people in Korea.

The ministry said this year’s annual car registration growth is expected to reach 4 percent, which is the highest figure since 2003.

“For the growth in this first half, there were many new cars introduced, while increasing demand for SUVs and the rapid sales growth of imports have also contributed,” the ministry said in a release. “A total of 20.17 million vehicles are expected to be registered at the end of this year.”

The ministry said that 738,801 locally produced vehicles were newly registered in the government database over the January-June period, up 2.3 percent from the same period last year.

The largest number of registrations by model was Hyundai Motor’s Sonata, a midsize sedan, which received a full makeover for the first time in seven years. Kia Motors’ Morning citycar came in second followed by the Hyundai Grandeur (sold as the Azera overseas).

“The main characteristic in new car registration in the first half is rising demand for SUVs, which accounted for 21.4 percent of the first half registrations, up 3.1 percentage points from the same period last year,” the ministry said. “Expansion of a culture of leisure and the popularity of diesel vehicles due to high gasoline prices seems to be reflected in that result.”

The ministry said a drop in the number of deregistered vehicles also helped pull up the overall number of vehicles in the country.

In the first half of the year, the number of vehicles deregistered came to 468,471, down 8.9 percent from the same period last year, the data showed.