X-rated anime the first to be released on IPTV

X-rated anime the first to be released on IPTV 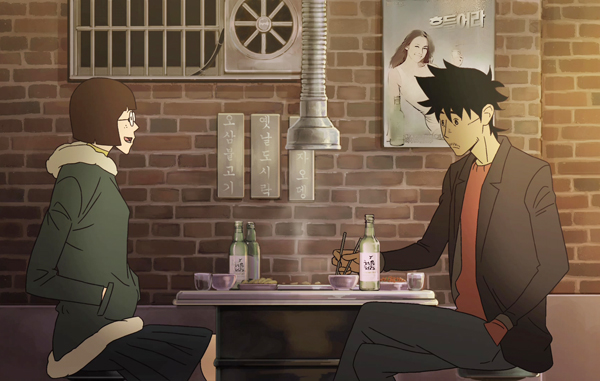 The relationship between love and sex is examined in the adult-themed anime that is available exclusively on IPTV and mobile carriers. Provided by Adam Space

With its release through IPTV providers yesterday, the adult-only anime film “Crazy Hyundae-sa” made history by forgoing a cinematic release.

The webtoon it is based on, “Crazy Hyundae-sa” - meaning both “contemporary history” and the name of the male lead - was released through the portal website Daum in 2012. It was penned by Kang Dong-ha of “Great Catsby” and “Killing Romance” fame.

The IPTV adaptation was produced by X-rated-animation director Yeon Sang-ho (“King of the Pigs” and “The Fake”) whose dark humor pervades every scene.

“Crazy Hyundae-sa” is about a 32-year-old illustrator instructor on the verge of getting married.

In this raunchy cartoon, Hyun-dae informs his long-term sex partner Min-ju (Lee Eun-woo) that he is about to settle down with Soon-yi (Lee Sang-hee). Consequently, the two break up, and while Min-ju walks away with no care, Hyun-dae starts obsessing over her.

The relationship between love and sex is examined in detail in the anime that is situated somewhere between reality and fantasy.

Fans of the cartoon will rejoice to know that the TV adaptation looks just like the online format.

The actors who worked on the anime said that they had to down beers just to get the recording done and it’s not hard to see why.

Jung, who voiced Hyun-dae, said his character has a lot more to him than it seems on the surface. “[He] has a lot of pain underneath and that’s why he keeps going after women.”

The video on demand comes in three installments totaling around 4 hours. The film signals a first as it is an anime created purely for the home theater. It is available through Olleh TV, BTV, U+TV as well as other network carriers.