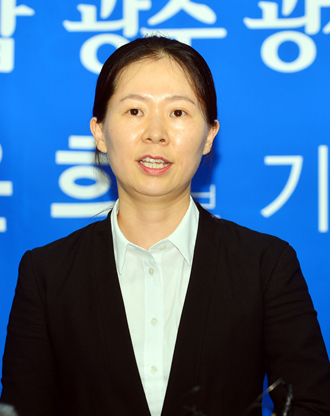 Leaders from the main opposition New Politics Alliance for Democracy (NPAD) once again faced protests from party members over its nomination of a former police official to run in the July 30 by-election for Gwangsan B District, in Gwangju.

The city is a stronghold for the liberal party.

The opposition’s nominee, Gwon Eun-hui dropped a bombshell revelation concerning the top spy agency’s online smear campaign against liberal candidate Moon Jae-in ahead of the 2012 presidential election. Gwon, who served as the director of the crime investigation department at the Suseo Police Precinct in Seoul at the time, publicly stated in April 2013 that she was pressured by her superiors to keep quiet about the National Intelligence Service’s illegal online campaign.

Kim Yong-pan, one of her superiors and the chief of the Seoul Metropolitan Police Agency, ordered her to destroy and manipulate evidence, she alleged to the press and prosecution last year.

Kim, however, was acquitted of the charges at the first trial and in the appeal, a ruling Gwon called “shocking.” She tendered her resignation, quitting in July 2013.

The NPAD’s leadership made their surprise nomination on Wednesday, tapping Gwon as the candidate for the Gwangsan B District race, which she accepted.

But the decision triggered backlash not only from the ruling Saenuri Party, but also from some main opposition members.

“The nomination has degraded the value of her righteous revelation,” Jun Byung-hun, a former NPAD floor leader, said yesterday on his Twitter account. “The ‘strategic nomination’ for Gwangsan B District has become one of the worst nominations in the party.”

Another NPAD member, who requested anonymity, told the JoongAng Ilbo yesterday that, “Although she is a great person, this nomination is the wrong choice. Even if she is to be chosen, she can run in the next election, not in Gwangju.”

The ruling party also condemned Gwon and her nomination, saying NPAD rewarded her for her “false revelation” with a candidacy and that she likely quit her job deliberately to make her political debut.

“The opposition party is trying to make a former public official who denounced the entire organization she used to belong to into a lawmaker,” Saenuri leader Yoon Sang-hyun said at a party meeting.

Rep. Cho Hae-jin, also from the ruling party, added in the meeting, “NPAD and Gwon both became criminals of political bribery through the nomination. They should withdraw the nomination immediately and make a public apology.”

Saenuri lawmaker Kim Se-yeon echoed those concerns in a recent TV debate program, saying Gwon’s nomination could raise concerns that the political ambitions of a public official might affect the nominations of other political parties “and spark social confusion.”

“Her entire life is full of sincerity,” Ahn told Yonhap yesterday. “She could have chosen a life as a lawyer or a judge to be successful, but she decided to become a police officer, and that is proof that her life is sincere.”

Born in Gwangju, Gwon studied law and passed the bar exam but chose to become a police official, which drew public attention.

She passed the national test in 2005 to become the first female police officer at the Yongin Police Precinct. In 2007, she also became the first director of the department of investigation at the Seocho Police Precinct in eastern Seoul.

Gwon said yesterday in a radio interview that in running in the July by-elections, she just wanted to reveal the truth.

She also denied the allegation that the NPAD nomination was actually a political reward for her testimony, adding: “I just thought it was wrong to remain silent while my superiors violated principles and procedures [in investigating the NIS case].”