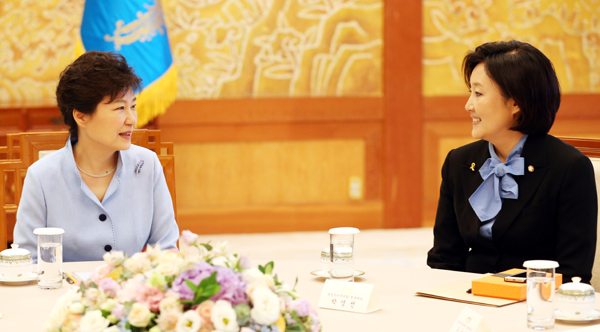 President Park Geun-hye, left, talks with Park Young-sun, floor leader of the main opposition NPAD, along with three other leaders (not seen in photo) of the ruling and opposition parties yesterday in the Blue House. [Joint Press Corps]

President Park Geun-hye and four leaders of the ruling Saenuri Party and opposition New Politics Alliance for Democracy (NPAD) met at the Blue House yesterday in an exercise to reach across the aisle.

They said such gatherings may even become regular events.

Analysts saw the meeting as an attempt by Park to combat her image of being unable to “communicate” with people, particularly the opposition, which has contributed to a fall in her approval ratings. In her 18 months in office, the only time the five political bigwigs came together at the Blue House was last week at a banquet for Chinese President Xi Jinping, who was on a two-day visit to Seoul.

The meeting resulted in no tangible breakthroughs despite several proposals made by the two floor leaders and two chief policy makers from each party.

Park, floor leader of the NPAD, said in a joint press conference with the other three lawmakers following the morning meeting that she asked the president to consider dropping her nominees for minister of education, Kim Myung-soo, and minister of culture, Chung Sung-keun.

Kim is under pressure by the opposition and even some members of the ruling party to withdraw his nomination because of accusations of academic plagiarizing. Chung is under fire for a history of drunken driving.

The president was quoted by the floor leader as responding to the request by saying, “Well understood. I will refer to it.”

It remains to be seen what President Park will do with the two troubled nominations. The National Assembly is scheduled to decide on the adoption of reports on the confirmation hearings for the two nominees, the step preceding a vote on the nominations at a plenary session.

In regards to Lee Byung-ki, who was nominated to head the National Intelligence Service, the NPAD floor leader said the four told President Park that they decided to approve the hearings report for the candidate after taking into consideration the lengthy vacuum in the post, adding that the opposition still thinks him an inappropriate choice for the post.

“We also proposed that the president expedite reform within the spy agency including prohibition of political interference,” the floor leader said.

Confirmation hearings for eight cabinet nominees have been under way from the start of the week. They were part of a major reshuffle of Park’s cabinet in the wake of the Sewol ferry tragedy on April 16.

The Kim Young-ran bill will enable authorities to punish government officials for taking bribes worth 1 million won ($984) or more, regardless of whether they repaid the bribes with political favors, whereas the Yoo Byung-eun bill would allow the government to go after illegally obtained assets.

“We have reached a decision to pass those bills during the August parliamentary session after gathering different opinions at an open discussion,” said Representative Park.

She added that lawmakers have consented to passing a special act at a plenary session on July 16 that will award jail terms of up to 100 years to people responsible for accidents or crimes that result in two or more deaths to prevent calamities like the Sewol sinking. It is the so-called Sewol special act.

Lee Wan-koo, the Saenuri floor leader, said at the conference that he is upbeat about the prospect of regular “open-hearted” discussions between the Blue House and the National Assembly. The president agreed to the idea, he added.

“What people want from the president is communication,” he said. “No matter how often we meet the president, it is never too much.”

But Woo, the opposition chief policy maker, stressed the meeting with the president was not a mere courtesy call and that she should heed the messages delivered to her.

The attendees also talked about the sagging local economy with the president. “Thoughts of how we can revive the economy never leave my head,” President Park was quoted as saying by a Blue House correspondent who was allowed to represent the press for the first few minutes of the meeting.

“It was showing signs of recovery before but has been staggering ever since the Sewol accident,” she was quoted as saying. “Those who are hit hardest are the ordinary people and small-store operators.”

President Park also congratulated the NPAD floor leader on her election as the first-ever woman to assume the post. In response, the anchorwoman turned politician said it was possible because Korea saw its first female president in Park.

The meeting, which had initially been set to last 45 minutes, was extended by 40 minutes to end at 11:55 a.m. The two floor leaders - Lee and Park - have been meeting at 11 a.m. every Monday ever since they took their positions.

No details about the meeting were available from the presidential office. Min Kyung-wook, the presidential spokesman, said the Blue House agreed with the lawmakers not to release any statement. “Since the party leaders already gave details [during the conference], we won’t,” he told reporters.