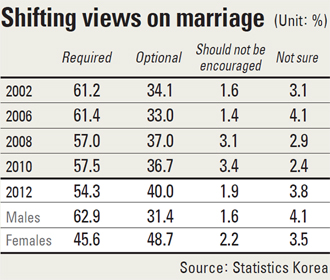 Today’s youth appear to have less traditional views on marriage, with fewer young people believing that marriage is necessary.

A survey of those aged 15-24 showed that teens and young adults, particularly women, have more flexible attitudes toward marriage, according to Statistics Korea.

Only 45.6 percent of female respondents agreed that marriage is a necessity, the lowest since 2002.

Forty-eight percent of women said that tying the knot is optional.

As for male respondents, 62.9 percent said that marriage is necessary while 31. 4 percent see it as an option rather than a requirement.

In 2012, Statistics Korea tracked a cohort of teens into early adulthood in cooperation with the Ministry of Gender Equality and Family. The data was released yesterday. Accounts of those who responded that marriage is a requirement often hovered around 60 percent until 2006, but it declined to the 50 percent range in the late 2000s.

The increasingly flexible view on marriage comes at a time when the number of newlywed couples is on the decline. In addition, more people are delaying marriage due to a combination of factors involving financial stress and the emotional burden.

That attitude reverberates among many adults. One survey showed that four out of 10 women between 20 and 30 believed marriage is no longer a requirement. According to the Hyundai Economic Research Institute in February, a survey of 539 men and women in that age group revealed that as many as 40.4 percent of 287 female respondents answered that marriage is optional, while 59.6 percent said marriage is necessary.

In response to the question “What makes you think marriage is optional?” most people pointed out the financial burden of buying a house and paying for a wedding ceremony (42.1 percent), followed by insecure job conditions (34 percent), a disruption in enjoying their personal lives (14.3 percent) and difficulties coping with in-laws (9.1 percent).

Thirty-eight percent of men said that women should take the lead with household chores, with 21.6 percent of females.