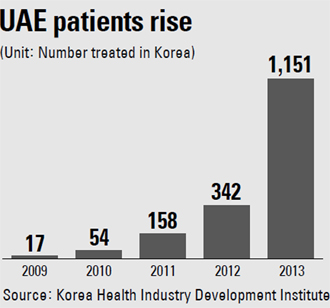 Seoul National University Hospital (SNUH) has been commissioned to operate a medical center in the United Arab Emirates for the next five years, marking the first time a Korean hospital will oversee the management of a foreign general hospital.

SNUH announced yesterday that it will be in charge of operating Sheikh Khalifa Specialist Hospital in the UAE’s Ras Al Khaimah, staffing, managing budgets of 1 trillion won ($987 million) and setting up an information system at the medical institution.

SNUH’s chief director said that the size of the deal will range from 7 to 8 billion won annually, but added that the exact commission fees have yet to be decided.

SNUH Director Oh Byung-hee said the Korean hospital beat out seven bidders from other countries, including the United States, Germany and the U.K.

Oh attributed its success to the great reputation of Korea’s medical equipment as well as the nation’s overall medical system.

“We developed our own medical information system in 2003 and kept updating the system,” Oh continued, “I think the sophisticated system appealed to the UAE. The American hospital system was much cheaper, but when considering quality, our system is superior.”

“UAE people are well aware of the standard of Korea’s medical system because Korea already had a lot of patients from the UAE,” he added.

With growing global recognition of the Korean medical industry’s expertise, the number of foreign patients coming to Korea for medical treatments has drastically increased in recent years, especially in the Middle East.

According to the medical industry, a majority of patients from the Middle East come for cancer treatment. Last year, 1,151 patients, whose medical expenses were covered by the UAE government, came to Korea, a jump from 342 in 2012.

The director had high hopes for the management agreement.

“The UAE is planning to build two to three more general hospitals,” he said, “So, if we undertake this successfully, we can have the opportunity next time.”

Oh also said that 15 to 20 percent of health professionals at SNUH will be dispatched to the Emirates.

Korea’s growing profile in medicine was reflected in an agreement signed last year by the Ministry of Health and Welfare and its Saudi Arabian counterpart.

Under the agreement, the Medical System Twinning Project, Korea was tasked with setting up specialized medical facilities in five Saudi cities and will act as a main partner in the oil-rich country’s 10-year project to improve its medical infrastructure.