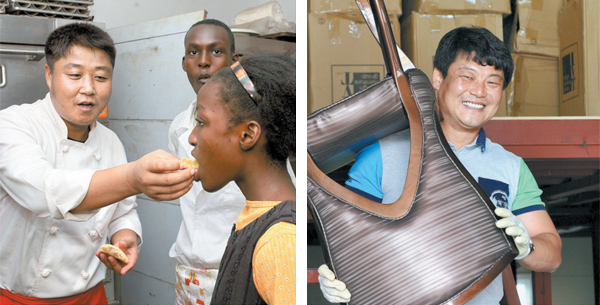 Left: Park Gwan-il, left, gives bread to a child at his baking school. Once a juvenile offender at a reformatory, he is now a missionary and runs an orphanage and baking school in Tanzania. Provided by the Ministry of Justice Right: Jang Yeong-cheol severed contacts with his old friends to live a different life. He is now a businessman and owns a furniture import company and a wholesale furniture business. By Kim Seong-tae

For most young people who have come out of juvenile correctional facilities, it is difficult to land a job and adjust to life on the outside. Many only end up committing more crimes.

But there are success stories - those who let go of their pasts and focus on moving up. Most of them had mentors, they admitted, who helped them follow the right path and away from petty crime.

Park Gwan-il, 43, a missionary who runs an orphanage and baking school in Tanzania, is one of the few. In the scorching heat on Tuesday afternoon, he was moving iron scraps and wires he had gathered at a junk shop in Wonju, Gangwon.

He visits Korea infrequently, but when he does, he collects debris to put a little bit of money toward his operation in East Africa.

Park himself also grew up in an orphanage in Seoul. He ran away from home in 1981, when he was in the fifth grade and made his living polishing shoes.

To earn more money, he eventually joined a pickpocket gang but was apprehended in 1985 at the Namdaemun Market in Jung District, central Seoul. He was sent to a shelter, but ran away just a day later.

But the young Park couldn’t stop himself from committing crimes. He and a friend once assaulted a drunken man to steal his money. After that, he had to stay in a reformatory for a year and a half.

“A Christian volunteer group of middle-aged women visited the reformatory every week and gave us food they had prepared,” Park said. “One day, a friend of mine [in the reformatory] had an epileptic seizure and a member of the group cried and wiped the foam from his mouth as if he was her own son. I was moved by the scene.”

After leaving the reformatory, Park entered a missionary school of the mission that runs the volunteer group, but he couldn’t push away the temptation of returning to a life of crime. He started hanging out with his old friends - and ended up in prison twice.

“I used to blame my environment when I was in Mokpo Prison [in the mid-1990s],” Park said. “But I suddenly had an epiphany that this just wasn’t true, and I could make my life different.”

He cut contacts with his old group and worked at juvenile shelters run by the mission. There he met his wife, who wanted to become a missionary.

He and his wife flew to Tanzania in September 2006 and founded an orphanage called Mustard Seed Village. They subsequently established the baking school in 2011 to give the orphans vocational training. His wife previously worked as a nurse, caring for children with HIV.

“Tanzania is far away from my home country, but I wanted to take care of the orphans so that they wouldn’t spend their childhood as I had,” Park said when asked why he set up his orphanage there.

While he stays in Korea to earn money for his center’s operations, he sometimes visits juvenile shelters, where he gives talks about his experiences. There, he asks the teenage offenders to take good care of themselves, and tells them that they are not alone - that there are people somewhere willing to help them.

Like Park, 40-year-old Jang Yeong-cheol, who runs his own furniture business, also had a difficult time as an adolescent.

“I steeled myself,” Jang said, recalling how he decided to change his life 20 years ago. “After leaving the reformatory, I severed contact with my friends and didn’t even go downtown [in Cheongju, North Chungcheong] because I didn’t want to see them.”

Jang said he used to be strong among his friends. He joined a gang when he was in middle school and was even sent to a reformatory once for two years after committing assault.

His life-time mentor, Choi Yang-jae, 49, was a teacher at the reformatory at the time. Choi believed that Jang would make a good ssireum athlete, or a Korean wrestler, and recommended he learn.

Not long after, Jang won a national competition among the juvenile reformatories. Coming back from the match, Choi told him, “See? You can do anything. You did a good job.”

It was the first complement Jang remembers hearing as a teenager. So he asked Choi to become his mentor and went on to complete his high school courses studying at the reformatory.

When he got out, Jang made promises to himself: He would sever contact with his old friends for three years, he would always make sure to return home before 10 p.m. and he would not go downtown where he might run into his old group. He would follow Choi’s advice.

Keeping his word, he started working at a furniture store run by a friend of his father.

“At that time, I looked in the mirror and practiced smiling,” Jang said. “I came to work first thing and came home last. I thought, I could stand on my own feet now or never.”

After 10 years, he was eventually promoted as a manager at the shop, with 10 employees. And he even married the owner’s niece.

In 2006, he launched his own furniture business in a complex in Cheongwon County, North Chungcheong. Now Jang is a businessman, and owns a furniture import company as well as a wholesale furniture company.

At Choi’s recommendation, he also began to counsel troubled students in 2010.

“A mistake or two won’t end your lives,” Jang tells them. “Have confidence in yourself, and it’s never too late.”