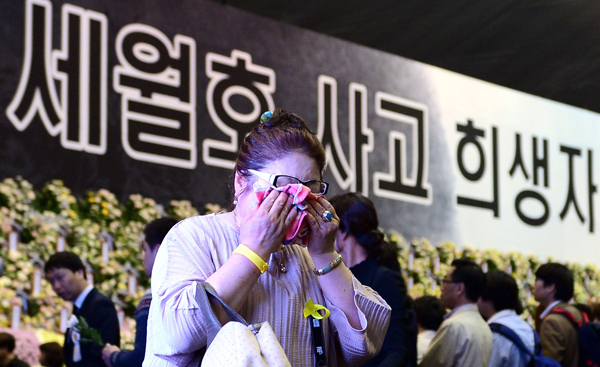 It may seem obvious that the secret to success among top students is thorough review. German psychologist Hermann Ebbinghaus is responsible for framing the “forgetting curve” hypothesis, in which a person who does not attempt to retain information forgets half the information on average, 70 percent after a day and 80 percent after a month. The only way to slow down this exponential decline, he argued, is repetition.

An exhibition last week reminded me of the correlation between memory and repetition. Seochon Art Gallery in Hyoja-dong, Seoul, presented “Park Ye-seul, No. 17, Class 2-3 Danwon High School.” Eighty-five days after the Sewol ferry tragedy, most people are back to their routines and have gradually begun to forget the disaster. But the exhibition reminded Koreans to continue to mourn and pay attention to the event.

Park Ye-seul was one of the 293 people who died in the disaster. Her father cherished her artistic talent and had collected her artwork since her childhood. After the incident, he said in an interview that he would like to hold an exhibition for his daughter someday. The CEO of Seochon Gallery learned of the story and took on the initiative. “People say we must not forget, but I want to highlight what we should not forget and why. It is not the incident itself that’s so tragic. The dreams of Ye-seul and all the other victims have been crushed.”

Park, who aspired to become a designer, drew a pair of high heels, a matching outfit that she would like to wear with her future boyfriend, and the house, complete with a spacious living room, in which she would like to live. Korean artists got together and created models based on Park’s designs. The visitors were solemn and grieved the loss of the young souls. They included high school students who came after their final exams and mothers who have young children. Because the exhibition was publicized in the media and on social networks, an average of 1,000 people visited the gallery each day over the weekend. The line stretched out on the street on hot summer days, and messages in memory of the victims were posted in the gallery.

After the incident, we promised “not to forget.” University of Munich Professor Ulrich Beck, the author of “Risky Society,” warned of oblivion in his lecture on July 8. The Sewol ferry incident was an extraordinary disaster that enraged citizens, but society does not transform, or “verwandlung,” on its own, he said. It is important that reporters, other groups and citizens remember.

There is only one way not to forget. The key is constant reminder. Even before a national safety day is designated and a proper memorial park is established, we must constantly remember the victims through various events like the Park Ye-seul exhibition. The gallery will exhibit Park’s artworks indefinitely and would like to add more works of art from other victims, as well as collaborate with more artists and designers who support the cause. The forgetting curve of the Sewol ferry incident has to be different.

*The author is a reporter of the JoongAng Sunday.