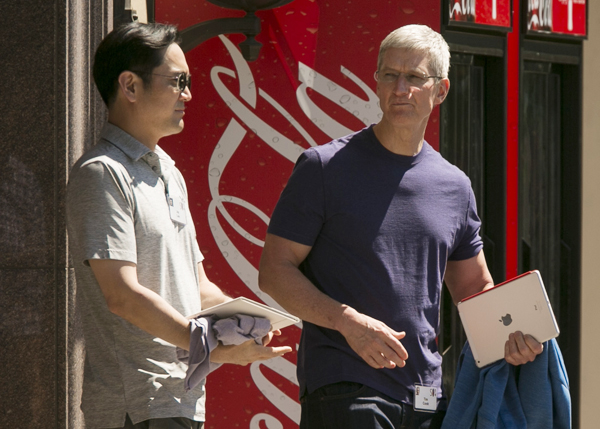 Apple, after failing repeatedly to win a sales ban against Samsung Electronics over smartphone patent infringement, is now trying what it describes as a more modest approach.

Apple presented its arguments today to U.S. District Judge Lucy H. Koh in San Jose, California, for a “narrowly tailored” ban on some older Samsung models after a jury in May found infringement by both companies. Koh twice rejected the iPhone-maker’s request for a U.S. sales ban in a previous patent case against the Galaxy phone maker.

This time, Apple said it’s targeting specific infringing features in nine Samsung devices and is offering what it calls a “sunset period” to give its Suwon-based rival a chance to design around the features before any ban is enforced, according to a court filing.

After hearing from both sides today, Koh didn’t say when she will rule.

Apple’s “efforts will surely help, though I don’t know whether they will be enough,” Michael Risch, a law professor at Villanova University, said in an email.

The trials in San Jose between the world’s top two smartphone makers in 2012 and this year followed patent battles across four continents as each tries to dominate a market valued at $338.2 billion last year, according to data compiled by Bloomberg. In the second trial, Apple won $120 million of the $2.2 billion in damages it sought.

One of three patents Samsung was found to infringe in the second case allows a user to make a call by clicking on a phone number within a web page or email instead of having to dial it separately. Another enables a user to unlock the device through gestures, and a third covers a function for automatic spelling corrections.

The jury found that Apple infringed one Samsung patent covering functions related to retrieving, classifying and organizing digital images, awarding $158,000 in damages. Samsung is not seeking a sales ban against Apple.

“Rather than barring entire product lines from the marketplace, Apple merely proposes to stop Samsung from further use of the specific features that the jury found to infringe Apple’s three patents,” Apple said in its filing. “Having represented that it can design around Apple’s patents completely and quickly, Samsung cannot complain that Apple’s narrowly tailored injunction will deprive the public of a single Samsung product.”

Adam Yates, a spokesman for Samsung, and Kristin Huguet, a spokeswoman for Cupertino, California-based Apple, declined to comment on the sales ban fight.