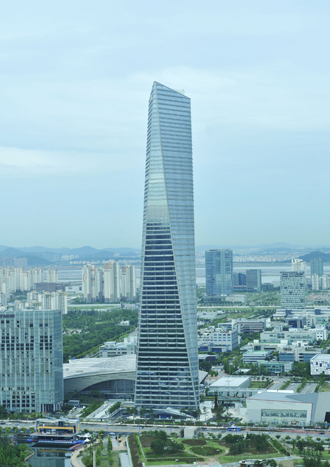 The Northeast Asia Trade Tower was built by Posco Engineering and Construction. Provided by the company

After finishing Korea’s tallest building in Songdo International Business District, Posco said it wants to lead economic development in the area but wants the government to give it the same tax benefits as foreign companies.

Posco Engineering and Construction, the construction arm of Korea’s top steelmaker, held a completion ceremony on Thursday for the Northeast Asia Trade Tower, which is 68 stories and 305 meters (1,000 feet) tall and located in the Incheon Free Economic Zone. The company said it took eight years to build the tower at a cost of 516.3 billion won ($506 million).

The Doosan We’ve the Zenith complex in Haeundae, Busan, which was built in 2011, was previously the tallest building in Korea at 80 stories and 301 meters.

“I feel proud that the Posco family is participating in a century-lasting project that aims to lead the prosperity of Northeast Asia and the country,” said Posco Chairman Kwon Oh-joon. “We expect the creation of the Songdo landmark to be a catalyst for boosting the region’s economy and bringing capital into this global city.”

The tower will mainly be an office building but will also have a hotel and an observation deck to attract visitors. Posco said that its trading affiliate Daewoo International will move into the building in September after the Incheon Asian Games.

Kwon said that Posco, the nation’s sixth-largest conglomerate, put its best efforts into creating the global city in Songdo by treating the project as if it was “building another steel mill.” Posco E&C moved into the city in 2010, while Posco Engineering made the site its new home in March.

But the Posco chief also said that the government should give the group extra support, such as easing regulations for the conglomerate and other local companies, for their efforts.

“Before focusing on bringing foreign companies, I think it’s very important to optimize the business environment in Songdo around local companies that have already made their base here,” Kwon said.

Posco said that the tax incentives given to foreign companies should be applied to local businesses, citing that special economic zones in Shanghai and Singapore give tax benefits regardless of companies’ nationalities.

“The biggest barrier for this free economic zone is discrimination toward local companies along with regulations around the metropolitan area,” said a spokesman at Posco E&C.