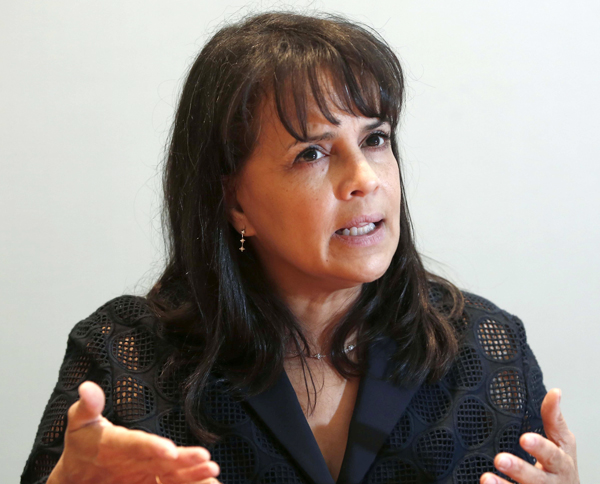 Myriam Curet, senior vice president and chief medical officer at Intuitive Surgical, which invented the da Vinci robotic surgery system, is one of the most important people in the company’s endless cycle of innovation.

Curet visited Seoul last month to speak at the Korean Medical Association about the future of robotics.

Curet clearly explained the new technology developments that are under way at the company.

“We are looking at ways to enable a surgeon in one city to teach a surgeon in another city as they are doing a more complicated [surgery],” Curet said. “So for the first time they do a more complicated case, it enables more mentorship. And in order to do that, you need to have special communications that will allow the surgeon who’s teaching, with ghost tools, to show the surgeon who’s learning what to do. Because sometimes you can’t just say it, you need to show it. And sometimes you need to send videos or a picture that the surgeon who’s learning can see. So we’re investing heavily in that technology.”

The company is also working on eye-tracking, remote-proctoring and imaging technologies.

“The imaging - nerve imaging, urinary imaging, lymph node imaging - that’s an area that we are also investing in,” she said. “There’s a lot of areas that are three years, five years, 10 years out.”

Curet was well aware of the time period for the innovation plans and is confident about the path forward.

Recently, Intuitive Surgical developed a robotic stapler that is actually attached to the robot, which the surgeon controls through a console.

“There’s also developments of new instrumentations; so for example, the stapler. There’s different loads that have different staple heights and different sizes. So there’s a lot of development being done - we’ve got a full range of stapling for every possible situation that you could be in,” she continued.

“It’s articulated, so it has a wrist. So it can change how it gets around to be fully functional,” she added.

The new product is in the registration process at the Ministry of Food and Drug Safety.

Intuitive Surgical is renowned in Korea for its da Vinci robotic system, which allows surgeons to access small organs in difficult-to-reach parts of the human body.

With the da Vinci, small incisions are used to insert miniature instruments that simulate the human wrist and a high-definition 3-D camera. Seated comfortably at the da Vinci console, a surgeon views a magnified, high-resolution 3-D image of the place of surgery inside the body.

As of April, 3,036 da Vinci Systems were being used worldwide, 46 of which are being used in Korea. About 520,000 da Vinci procedures were performed last year.