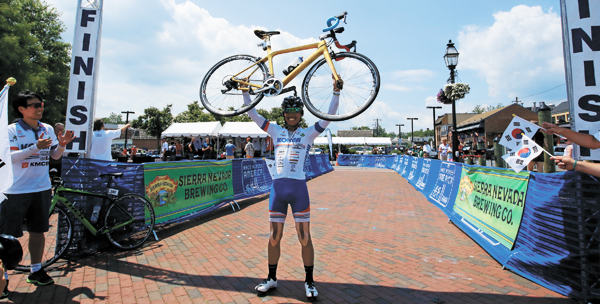 Amateur Korean cyclist Lee Hyeong-mo holds up his bicycle as he becomes the second person from Asia to complete the 3,000-mile Race Across America (RAAM) cycling competition in the solo male under-50 category. Provided by Lee Hyeong-mo

Lee Hyeong-mo, 35, from Gumi, North Gyeongsang, became the second cyclist from an Asian country in 20 years to complete the solo cross-country Race Across America (RAAM).

Cyclists started out on June 11 from Oceanside Pier in California, riding some 4,830 kilometers (3,000 miles) across the country to arrive in Annapolis, Maryland.

Amateur cyclist Lee competed in the solo male under-50 category and trekked over 12 states, climbing a combined elevation of more than 170,000 feet (51,816 meters).

Lee braved the sweltering heat of the Arizona deserts and the windy plains, cycling across the Rocky Mountains and the Appalachian Mountains.

And while Lee completed the race, his record itself can be considered last place.

The race must be completed within 12 days - with the fastest cyclists finishing around Day 7. Lee came in at 11 days, 21 hours and 58 minutes, just under the cutoff.

But RAAM sees less than 50 percent of its competitors finish the race. Of 23 competitors in Lee’s category, just 14 passed the finish line.

“Our country only looks at the results, at how high you went or how quickly you raced,” Lee said. “However, I came to a realization after experiencing RAAM: through facing difficulties and overcoming them, you become more hardened to life. Results that can be seen with the eye aren’t everything.”

Lee is no stranger to victory. In 2006, he successfully climbed Mount Everest, the world’s highest mountain. And in 2011, he competed in a RAAM relay race and won the Lee Mitchell Award for the two-person under-50 category. His partner in the competition, Kim Ki-joong, raced in the RAAM last year but was ultimately defeated.

Lee, who is already well known in Korea for having placed first in amateur cycling tournaments, took a shot this year and formed an eight-member support team, which helped him with training and accompanied him to California.

On the first day of the race, he only slept two to three hours and cycled rigorously, but biking 400 kilometers a day began to take a toll; Lee is primarily trained for short-distance racing.

His feet became swollen because he didn’t wear the right shoes for long-distance cycling, so he switched to mountain-biking shoes in the middle, but began to fall behind other cyclists.

As he faced fierce wind across the vast plain states, he was determined to give up.

“I had to race quickly to recover lost time, but the wind was blowing too fiercely. I wondered why it was blowing so hard just on me, so coldheartedly, and wanted to give up just there.”

He added that he collapsed on the road, but with the encouragement of his team, he stood up again.

“When I raced again, I raced with tears. That moment was so difficult, but when it passed by, it seemed like it was not that bad after all,” he said. “I was thankful to be cycling at that moment.”

But though he came in last, he still completed the race.

“I want to let more people know the worth of the path I raced in the RAAM,” Lee said.

He spoke of an American cyclist he met during the race. Last year, that cyclist failed to complete the race, coming in just one hour later than the time limit.

So the American challenged that defeat, and while he continued training constantly, his cycling speed was fairly slow. It seemed unlikely that he would be able to complete the race within the time limit. But this year, he finished an hour before final call.

“People are bent on results and are fixated on going quickly,” Lee said, “but if you do that, you can become exhausted early on. Even if you go slowly, if you go steadily, you can reach your goal.”