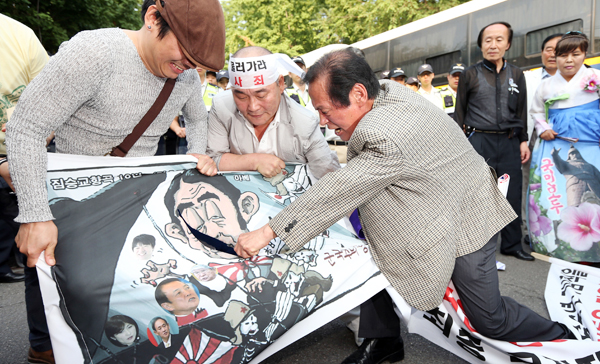 Protesters from a civilian organization tear apart a caricature of Prime Minister Shinzo Abe yesterday in front of the Japanese ambassador’s residence in central Seoul to protest the 60th anniversary of the founding of Japan’s Self-Defense Forces. [NEWS1]

A luxury hotel near the popular tourist district Myeong-dong in Seoul abruptly canceled a Japanese Embassy event scheduled for yesterday celebrating the 60th anniversary of the establishment of Japan’s Self-Defense Forces.

In an unexpected move, the Lotte Hotel in Sogong-dong, central Seoul canceled the reservation for the event on Thursday, a day before the scheduled reception hosted by the Japanese Embassy in Seoul to honor the founding of its post-World War II unified military forces.

Amid continued tensions between Japan and its neighbors due to unresolved historical issues, the administration of Prime Minister Shinzo Abe decided on July 1 to enable Japan to exercise its right to collective self-defense through an unconventional reinterpretation of its pacifist Constitution.

The Japanese Embassy sent out invitations to about 500 people, including Korean military officials, diplomats and other dignitaries, but few Korean officials were expected to attend in light of recent strain. Compared to previous years, this year’s event was planned on a bigger scale because it was the 60th anniversary. A Korean Defense Ministry spokesman said a mid-level official was sent to the event to maintain diplomatic relations.

Through the new interpretation of Japan’s peace Constitution, the Self-Defense Forces formed on July 1, 1954, will be able to wage war or counterattack countries when they strike allied nations. The drastic overhaul in defense policy has prompted concern from neighboring countries including Korea because of Japan’s moves to strengthen its military and whitewash its wartime aggressions during colonial rule.

“Reflecting the sentiments of the people, the Japanese Embassy’s special event that was scheduled to be held today was canceled,” a Lotte Hotel spokesman said yesterday.

“We have caused anxiety for the people for proceeding [with the event] without properly checking [with the Japanese Embassy] the exact details…” the hotel added. “In the future, we will work to more thoroughly check the details and carry out our tasks in order not to concern the public.”

It also said that the hotel considered safety reasons in the cancelation amid concern that protests against the embassy event may be held in the area. Instead, a smaller event was held at the Japanese ambassador’s residence.

Japanese Foreign Minister Fumio Kishida expressed regret over the cancelation at a press briefing, and Cabinet Secretary Yoshihide Suga said the Japanese government had lodged a strong protest with Lotte Hotel through its embassy in Seoul.

“Whatever the reason, it is extremely regrettable,” Suga told reporters yesterday in Tokyo, remarking on the cancelation of the hotel reservation. “Firstly, it was a problem with the hotel so we have lodged a protest, but we also plan to convey our concerns to the Korean government as well.”

Abe is on a state trip to Papua New Guinea - the first Japanese prime minister to visit the country in 29 years - following trips to Australia and New Zealand, in a move to bolster defense cooperation with the Pacific region as it has taken on a greater strategic importance to Tokyo.

The resolution, unanimously adopted by the Assembly’s foreign affairs and unification committee, “strongly condemns [Japan’s decision to exercise its right to collective self-defense] as a diplomatically provocative act.”

Earlier this week, the War Memorial of Korea decided to cancel an exhibit of popular Japanese cartoon “One Piece,” written by manga artist Eiichiro Oda, slated to open Saturday, over concerns about its Rising Sun flag imagery, which evokes memories of the Imperial Japanese Army and a painful colonial history.