Park aims for history in the LGPAs

Park aims for history in the LGPAs 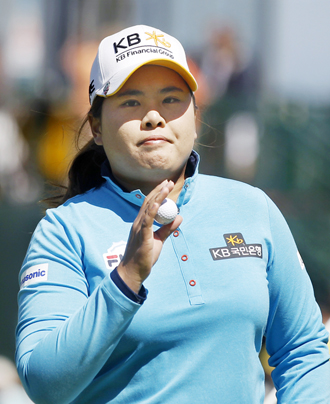 One year later, Park In-bee is still chasing history at the Women’s British Open. Instead of trying to win an unprecedented fourth straight major, Park has a chance to become only the seventh woman to win four of the LPGA’s majors. Instead of photographers capturing her every move at St. Andrews, the 26-year-old South Korean has gone about her work without fanfare at Royal Birkdale.

That changed Saturday with a remarkable start, and a late ruling that put Park in the lead.

On the tough opening stretch at Royal Birkdale, she ran off three birdies that sent her to a 4-under 68. Then, Park went from a one-shot deficit to a one-shot lead when Ahn Sun-ju was penalized two shots after her round for building a stance in the bunker on the 18th hole.

The 18 holes remaining could be a sprint among a dozen players.

Park had a one-shot lead over a pair of major champions - Suzann Pettersen of Norway (68) and Shanshan Feng of China (69) - along with Ahn. Julieta Granada (72) and Amelia Lewis (71) were another shot behind.

Ahn appeared to be the player to catch after what she thought was a 69 for a one-shot lead.

She was summoned to the rules trailer, where officials determined she used her left foot to build her stance in a pot bunker left of the 18th green. Ahn was assessed two shots for violating Rule 13-3. Her par turned into a double bogey. Her 69 became a 71. And she went from a one-shot lead in the final group to having to make up ground against Park, the LPGA Tour’s reigning player of the year.

“It’s disappointing, but it’s my mistake and I have to follow the rules of the game,’’ Ahn said through an interpreter. “I still have a day to go and I have to stay focused and try my best tomorrow.’’

The penalty also created a wide-open final round at Royal Birkdale.

Park was at 4-under 212, though 12 players were within three shots of the lead.