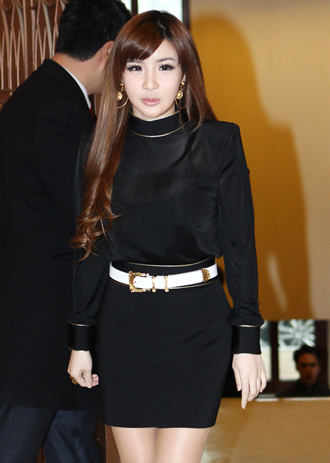 Park Bom, from the girl group 2NE1, will tentatively not attend shooting for the SBS reality show “Roommate,” on which she is a regular cast member, according to local reports yesterday.

Park didn’t show up on Saturday at scheduled “Roommate” filming sites, and many industry insiders say that she will leave the program for good. The 30-year-old singer was embroiled in a drug scandal early this month for allegedly smuggling 80 amphetamine pills - a drug that is illegal in Korea - four years ago from the United States into Korea.

It is said that her mother and grandmother were sending her the drugs, which are legal via prescription in the United States.

Right after the news broke, Yang Hyun-seok, the head of Park’s agency YG Entertainment, strongly refuted the rumor, saying that Park didn’t know at the time that amphetamines were illegal in Korea and that no parent would deliver drugs to their children. However, suspicions still remain.

Park is currently in Japan for 2NE1’s concerts there, but will not meet up with the members of “Roommate,” who also left for Japan on Saturday to shoot the program.