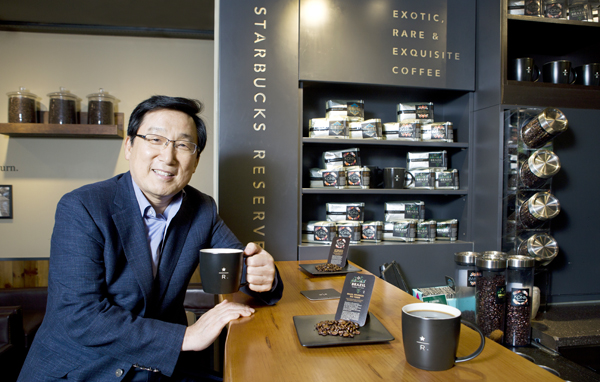 Lee Seock-koo, president and chief executive of Starbucks Korea, enjoys a cup of Reserve Kona coffee at a store near the Westin Chosun hotel in Sogong-dong, central Seoul. In March, the coffee chain introduced a line of single-origin premium coffees known as Starbucks Reserve. By Park Sang-moon

Lee Seock-koo, president and chief executive of Starbucks Korea, is continuously seeking innovation and change. Under his leadership, the Seattle-based coffee chain has significantly grown in Korea in terms of sales, revenue, number of stores and employees. It has also played a huge part in causing Korean consumers to fall in love with coffee in a country where drinking tea has been a long held tradition.

“My favorite drink is a cup of iced coffee using Guatemala Casi Cielo beans,” Lee said in an interview last month with the Korea JoongAng Daily at his office in Sogong-dong, central Seoul. “It has a very smoky taste, which I like very much.” This year, Starbucks Korea is celebrating the 15th anniversary of opening its first store in the country.

As an avid coffee drinker, Lee is passionate about a good brew. But he also shows love for his work, overseeing 650 stores in Korea. This is a major increase from the 297 Starbuck branches in Korea in 2009 and 327 in 2010.

“Our growth throughout the years has been based on a policy focused on localization, which respects Korean traditional culture and emotions,” he said.

Starbucks Korea has introduced many services that are considered the first of their kind by integrating Korea’s information technology with the services offered at a shop. Most recently, it started the Siren Order service, which is the world’s first smart order system, allowing customers to order drinks and make payments using smartphone applications before they arrive at a Starbucks shop. The idea is to save time, especially for busy office workers on their lunch hours.

Lee elaborated on the latest services offered by Starbucks Korea and also the key to its rapid expansion.

Q. This year for Starbucks Korea is very special because it is celebrating its 15th anniversary. What are some of the major achievements since the company opened its first store in 1999?

A. We opened our first store in front of Ewha Womans University in July 1999. And ever since, we have pursued both steady growth and social responsibility. Currently, we are sharing the coffee culture and passion with 300,000 customers every day, and have about 6,500 employees at our 650 nationwide stores.

Our growth throughout the years was based on a policy focusing on localization that respects Korean traditional culture and emotions. For example, in 2001, for the first time, we hung a Starbucks signboard written in Korean letters at our Insa-dong store [in central Seoul] and decorated the interior of the store in a traditional Korean atmosphere by having red clay mud-plastered walls. Following that store, other stores near Gwanghwamun, Anguk and Gyeongbok Palace opened with signboard in Korean letters.

In 2007, we also started selling tteok [rice cakes] using Gyeonggi rice at our stores and Red Bean Frappuccinos, which are similar to Korean patbingsu [shaved ice with red bean paste and other toppings]. … In September, 2012, we opened our first drive-thru store in Gyeongju [North Gyeongsang], and we now have eight drive-thru stores that all have screens on which customers can order drinks while making eye contact with our [employees]. Last year, we started using organic green tea leaves from Jeju Island to make green tea powder, which also has been introduced in other Asia-Pacific regions. The most recent service that we have launched this year is Call My Name, in which customers are called by their nicknames by the baristas when they order a drink. In March, we also started selling single-origin premium Starbucks Reserve coffee at five stores, while in May, we introduced the Siren Order service, which is the world’s first smart order system that allows customers to make orders and pay using a mobile application.

From left: Lee Seock-koo, far right, with employees, customers, partners and non-governmental organization officials in April at Seoul Forest, in Seongdong District, eastern Seoul. Starbucks Korea has been volunteering since 2010 to improve park facilities., Lee applauds barista Choi Bo-won, the brand’s first disabled coffee master, in May at the company’s support center. Lee, second from left, and Cho Yoon-sun, former minister of gender equality and family, fourth from left, and others make a coffee toast at the chain’s fourth neighborhood store in Daebangdong, western Seoul, in June. Provided by the company


Services integrated with information technology like Siren Order are interesting and innovative. Where do all the ideas come from?

The innovative services that we offer are a result of our efforts to respond to consumers’ needs and requests. The services are a great reflection of Korea as an IT powerhouse.

Korean consumers tend to prefer convenient and faster service and for them we developed a service in which they can order drinks using their smartphones. Also, we provide various digital programs linked to our website where consumers can purchase drinks and send them as presents to their friends and families. This is the Starbucks Card e-Gift program.

There are about 650 Starbucks stores across the country, which is a lot. What are the reasons behind the growth?

Starbucks doesn’t simply sell coffee, we also try to provide a space for our consumers where they can interact and communicate. Also, I would say that the secret to our growth is to maintain balance and harmony in globalization, as we are a global brand and we have to localize in Korea. This I would call “glocalization,” and this is a unique strategy pursued by Starbucks.

The strategy is that the taste of coffee is the same globally, but consumers can drink that coffee in an area where there’s a sense of Korean culture. And this doesn’t exclude the items that we sell at our stores. In March last year, we introduced the Mugunghwa tumbler commemorating Independence Movement Day on March 1. The tumbler sold out in just one day after it was released at our stores.

How significant is the Korean market for Starbucks?

Also, demand is growing among Korean consumers for a “Third Place” where people can go outside of their homes and offices for drinks such as coffee. Korea is one of the fastest-growing markets among the 64 countries Starbucks has entered.

Every year since 1999, Starbucks Korea has grown by more than double-digits. I would say the biggest strength of the Korean market is our baristas, who not only deliver tasty coffee to customers but also great value.

Another thing is that there’s a lot of creativity in the Korean market.

Don’t you find, though, that the price of a cup of coffee is too expensive at Starbucks Korea?

The prices of Starbucks drinks here are highly competitive. This is because we have personally made an effort to ensure that consumers can experience Starbucks at a very reasonable price.

Starbucks isn’t a store where we just sell good quality coffee. There are passionate partners [employees] that grind beans to make coffee for you and it is a place where coffee-goers are able to interact with each other. Again - it’s a “third place.” This is what makes Starbucks different from others and it’s the real reason why consumers repeatedly visit us.

We are doing our best to increase business efficiency. But it is true that there’s a burden on us with the rapidly increasing cost of coffee beans, labor and rent.

(After the interview last week, Starbucks Korea said it will be increase the price of some coffee drinks starting Wednesday by up to 200 won (20 cents).

Last month, Starbucks headquarters in Seattle said it will start a program to pay tuition for its employees that enroll in online courses at Arizona State University. Are there similar programs here for Korean employees at Starbucks?

Starbucks Korea since 2007 has been offering support to employees who take online courses at six universities.

Currently, about 300 employees have completed their courses or are in the process of taking courses. They are given up to 50 percent of their fees depending on which school they are enrolled in and 66 percent of admission fees are exempted.

The company announced in April that it will recruit more than 60 disabled workers this year. How many disabled people currently work at Starbucks Korea?

Together with the Korea Employment Agency for the Disabled, every quarter we recruit up to 15 disabled employees. This year, we plan to hire more than 60. Of the total 6,500 employees, there are 99 disabled. 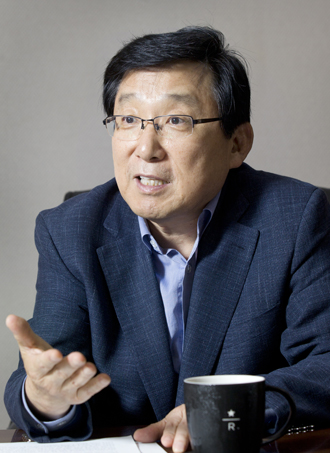