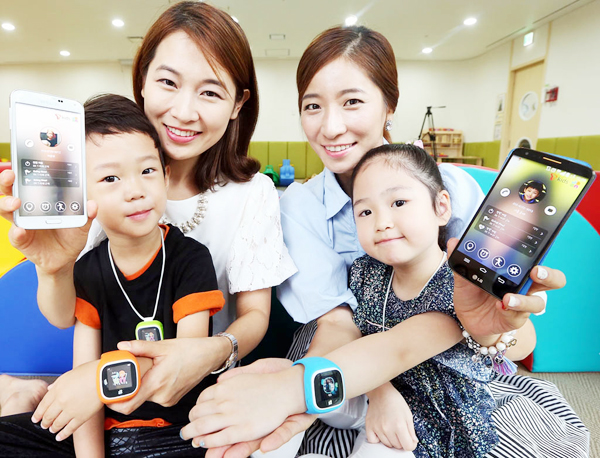 Working mother Suh Joo-young’s mind drifts off around 3 p.m. every day: The 34-year-old worries constantly whether her 5-year-old daughter has arrived home safely from kindergarten. “I became more concerned after I was told that my daughter became very anxious recently when the woman hired to pick up my daughter from school was late,” Suh said.

But now companies are rolling out smart devices that will put parents like Suh at ease. The products are designed so that a user can see his or her child’s location through a GPS tracking system as well as communicate with them.

These devices are made so children attending kindergarten and preschool, in particular, can easily access and wear the products. Such items are opening up an entirely new security and mobile device market for telecommunication companies and tech giants, including LG Electronics.

On July 7, SK Telecom became the first mobile service provider in the country to introduce such a device - a wearable mobile phone for kids it has dubbed the T JooN - which retails at 238,900 won ($234).

Parents who wish to subscribe to the service have to pay 8,000 won per month. Their children can wear the device like a wristwatch, and their location will appear on smart devices on a digital map.

SK Telecom is providing a service where the device guides the child on the shortest route with its navigation application, T map.

Parents also can record notifications and connect them to an alarm system: Instead of a typical ringtone, users can record messages telling their children when it’s time to go to a certain destination ? a hagwon, for example ? or that they should wash their hands before dinner.

LG U+ introduced a similar wristband-shaped smart device on Thursday exclusively for children called Kids On. Like SK Telecom’s T JooN, Kids On also details a child’s location on its own map app. It also warns parents through an alert service when their child is in a different place than the location they are supposed to be.

Children may also use the product to make calls to users whose numbers are pre-registered on the device. In an attempt to appeal to its younger audience, the Kids On even features cartoon characters like Hello Kitty and Tobot. The device was developed by LG Electronics.

“With a single communication chip placed in a wristwatch-like device that looks like a toy, parents can have necessary communication with their children,” said an LG U+ official. “This is a service that targets parents who are concerned about placing smartphones in the hands of their young children.”

In addition, in conjunction with the Ministry of Education, KT has been offering an emergency call service since April that is exclusive to elementary school students. The smartphone is waterproof and designed to fit tiny hands.

As vacation season approaches, the telecommunication companies are also stepping up services to prevent children from wandering off at beaches and amusement parks.

A new service by LG U+ called Kids Tag rings an alarm whenever a child whenever a child gets 30 meters (98 feet) away from their parents. The wristband is fitted with Bluetooth technology and the service has been available since Thursday.

Similarly, SK Telecom has been selling a Bluetooth device since April that connects to a child’s smartphone. Smart Green Button allows a youngster in an emergency situation to or without phone access to make a call with the push of a button. The device then alerts both parents and the police.

The mobile carriers are expected to further expand their child-related services as the potential for wearable devices for children continues to grow. “We noticed that a lot of parents want to know the exact location of their children,” said Yoon Won-young, the head of the marketing team at SK Telecom. “We plan on introducing services designed for children.”