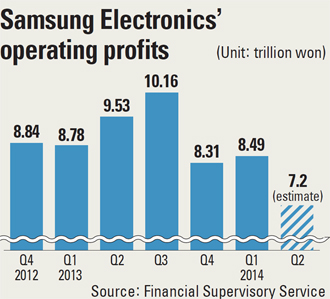 The magnitude of the drop in Samsung Electronics’ second quarter profits and sales was greater than many analysts would have predicted. But a hint was revealed when the company held a global strategy meeting two weeks prior to the disappointing earnings guidance announcement that made headlines last week.

It was a biannual meeting, but CEO and Vice Chairman Kwon Oh-hyun declared an emergency management system to the 500 executives gathering at its bases in Suwon, and Giheung, Gyeonggi, for three days through June 27.

The leaders of the world’s largest technology company decided to draft emergency business strategies for the rest of the year at each division and implement them beginning this month at all Samsung Electronics workplaces including overseas.

But some analysts taken by surprise by the steep decline in Samsung’s projected earnings for the second quarter asked a profound question: For a company that has constantly whipped itself up with self-invoked sense of crisis, how can yet another emergency strategy help - especially with the rules of the game starting to change?

The growth of smartphone sales, the biggest cash cow for the company for years, is slowing.

A host of ambitious Chinese competitors armed with piles of cash are nipping at Samsung’s heels, stoking concern in Korea that it is only a matter of years, not decades, until they catch up with Samsung in hardware technology for mobile devices.

“Basically, this is a wakeup call for the company to change,” said Byungho Park, professor of IT business administration at Kaist College of Business.

In a guidance last Tuesday, Samsung said its operating profit in the second quarter will be 7.2 trillion won ($7.07 billion), a whopping 24 percent slide from a year earlier. It will be the second consecutive quarter of declining sales.

Sales of the country’s largest exporter were estimated at 52 trillion won, down 9.5 percent from the same quarter a year earlier

“It is not that Samsung did not expect such a result,” Park said, “but it needs to know that it is a whole different challenge facing it now.”

The focus of the growth in smartphones has been shifting toward the lower end of the market, and if Samsung comes out with more no-frills products to compete with Chinese companies, it could recover, they say.

The smartphone business is showing signs of saturation, especially in the premium end. According to market research firm IDC, global shipments of smartphones will grow 19.3 percent this year, compared with 39.2 percent last year.

Lee Myung-jin, a senior vice president of Samsung Electronics, expected that the company would sell about 88 million to 90 million smartphones worldwide in the second quarter, but according to market analysts, the figure was only about 77 million.

Kaist’s Park said if Samsung wants new demand for smartphones, it needs to look beyond hardware innovation. Samsung’s former formula for success - copying leading players - is boomeranging on it with Chinese companies including Xiaomi and ZTE playing the same game, Park said. Within years, the Chinese may come up with a smartphone with a thinner and clearer display than Samsung’s, he said.

“Samsung has yet to live up to mounting expectations for a company in an industry that survives on one innovation after another,” he said.

The saturation of the smartphone market is worrisome for the entire Samsung Group, because many other parts of the group have tailored their businesses as supplements to the mobile phone business.

Samsung Display, the supplier of OLED panels for the Galaxy S smartphone lineup, and Samsung SDI, the supplier of batteries for Samsung phones, posted 80 billion won and 39 billion won operating losses, respectively, in the first quarter. Their second quarter performances, which will be announced later this month, are expected to be just a little better.

Samsung is known in Korea for a long-term perspective and it realizes it needs to find other revenue sources. But, the five new growth engines the group announced in 2010 - medical equipment, biomedicine, light emitting diodes, solar cells and electric vehicle batteries - have not produced visible results yet.

“They’re all in the doldrums, each and every one of them,” said Kim Young-woo, an analyst at HMC Investment Securities.

Kim said that Samsung has shown no potential to lead the LED market and virtually abandoned its solar cell business when Samsung Electronics handed that business to subsidiary Samsung SDI.

It does have potential in the EV battery market, but needs to significantly lower prices of its products to enjoy a success in that promising market, Kim said.

He said the group is making some investments in medical equipment but needs a partnership with a global company such as GE, Philips or Siemens. As for biomedicine, despite its sharp growth in investment in the area, it’s no replacement for smartphones, he said.

The group says those projects are so immense that it takes time for results.

“The new engines are something that won’t bear fruit in the short term,” said an official of Samsung Group. “In some areas, we are slowly seeing some progress.”

The success of the new growth engines are tied to the success of Jay Y. Lee, the heir-apparent of the group who is being closely watched in the absence of his ailing father, Lee Kun-hee.

In particular, Lee is looking at healthcare services using mobile platforms as a potential growth area. During the Boao Forum for Asia held in Hainan, China, in April, the junior Lee said that many countries are facing growing medical costs due to ageing populations and technical solutions to health care would create many opportunities for companies, including Samsung.

Jang Woo-seok, a research fellow at the Hyundai Research Institute, said Samsung may have to drop those projects if it finds they are not as profitable as it initially thought they would be. What can sustain the group should be something entirely new, he said.

“Google is trying to database the Earth and Amazon is seeking to develop different platforms of multimedia, but we don’t know what kind of new idea Samsung is up to,” Park said.

“What will be the next step for Samsung? Nothing is visible so far, and that’s worrying.”