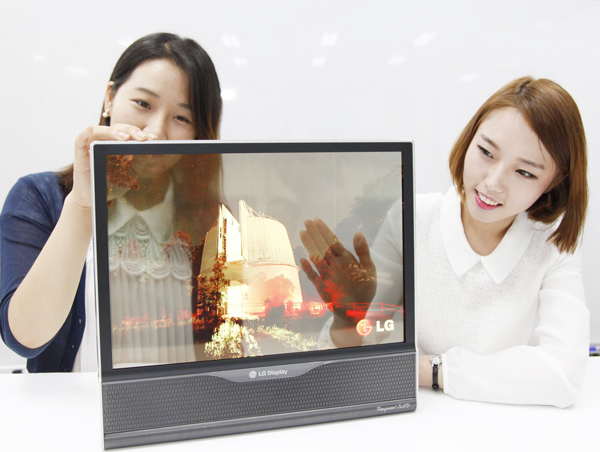 Models show LG Display’s transparent OLED. The OLED display is more advanced than existing ones. Provided by the company

Despite sluggishness in the global display market, Samsung and LG are aiming to maintain their leadership in displays by coming up with next generation products like the ones that wowed audiences in sci-fi flicks such as 2002’s “Minority Report.”

LG Display showed off some of its latest products Thursday, including a display that can be rolled up like a piece of paper and a transparent display that looks just like a window until it’s turned on.

Small flexible displays and transparent ones were developed based on LCD materials in the past, but this is the first time a company release an organic light-emitting diode flexible display and an OLED transparent display simultaneously. LG Display’s flexible model is the world’s largest OLED-based flexible display. It is 18-inches and features high-definition resolution of 1,200 by 810 pixels.

As Chinese IT companies try to catch up with Samsung Electronics and LG Electronics in the global smartphone market with enhanced smartphone manufacturing skills, Korean mobile giants are building up new specialties in high-tech materials and parts with products like displays, batteries and mobile application processor chips.

Korea hopes to make parts and material industries next generation growth engines that help them dominate new markets. LG Display’s 18-inch flexible display is the most recent example of the trend, which is going to eventually evolve from bendable to rollable and foldable displays.

LG’s flexible display features a curvature of 30 radian, meaning that the screen can display normal quality video while being rolled up to a 30-centimeter circle.

“LG set a new goal to develop a super large-sized, of about 60 inches, rollable and transparent display that features ultra high-definition resolution by 2017,” said an official at LG Display.

Samsung Electronics is focusing on enhancing the brains of smart devices, such as system semiconductors. One example is mobile application processor chips.

“I understand that Samsung is aiming to implant its own mobile application processor chip, the Exynos, into its upcoming phablet Note 4, which is scheduled to be released in the fall,” said an electronics industry insider. “Samsung has already used its own chips for low and mid-end mobile phones, but the company hopes to expand their use in the future.”

The company hopes to rebound from its disappointing second-quarter sales and profits with so-called “Notables,” meaning the Galaxy Note phablet smartphones, tablet PCs and wearable devices - mobile devices other than conventional smartphones. The company has pinpointed the Galaxy Note 4, Galaxy Tab S and its smartwatch Gear Live as its three flagship items for the second half of the year.

The new Galaxy Tab S was released in Korea and 19 other countries on Thursday. The Tab S is Samsung’s first tablet to be made out of active-matrix OLED (AMOLED), which consumes less energy and has better screen resolution than previous models. It is rarely used for tablets due to high costs. The tablet is also equipped with fingerprint verification technology on the home button, previously used on the Galaxy S5 phone.

Shin Jong-kyun, president and CEO of Samsung Electronics’ IT and Mobile Communications Division, called AMOLED technology “the identity of Samsung” for generating greater colors than LCDs.

The Gear Live, first unveiled at the Google I/O Developers Conference last month, is Samsung’s first wearable device that features an Android operating system. It is currently sold for 224,000 won ($220), a slightly lower price than the Gear 2.

Samsung is developing many healthcare products. One example is the Simband, which collects a user’s health information like heart rate, pulse, breath and blood pressure using a sensor and transfers it onto a cloud-based system.