Parties gear up for by-elections

Parties gear up for by-elections 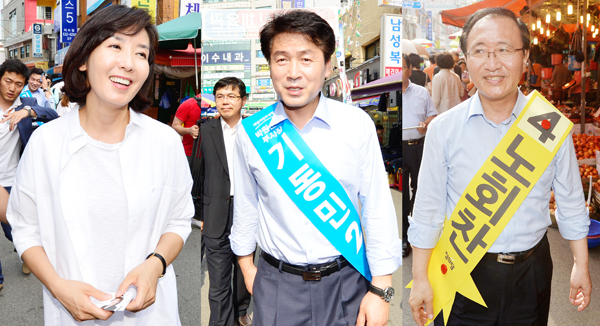 From left to right: Seoul Dongjak B District candidates Na Kyung-won from the Saenuri Party; Ki Dong-min from the New Politics Alliance for Democracy; and Roh Hoe-chan from the Justice Party, plead for support yesterday at a street market in Dongjak District, southern Seoul, ahead of the July 30 by-elections [NEWS1]

The ruling and opposition parties began bracing themselves over the weekend for the upcoming July 30 by-elections, in which 15 districts will be contested nationwide, after a two-day registration period for official candidates ended Friday.

“There is not a single aspect that our candidate Na Kyung-won lacks in qualifications [compared to his opponents]. I am confident that Na will win the victory and that the party will throw full support behind her to develop Dongjak B District,” said Lee Wan-koo, floor leader of the ruling Saenuri Party, during an interview with broadcast Channel A yesterday.

For the two main rival parties, winning the majority of the 15 vacant parliamentary seats is a pivotal task as it could shift the current balance of power. The Saenuri, which now commands the loyalty of 147 lawmakers, needs to win at least three races to maintain its majority in the 299-member National Assembly. The opposition New Politics Alliance for Democracy has 126 lawmakers under its banner and fielded 14 candidates in the by-elections.

Ten of the 15 districts are now vacant because former lawmakers gave up their parliamentary seats to run in the June 4 local elections while five lost their seats due to violations of national election law.

The NPAD previously held five of the 15 contested constituencies while the Saenuri had nine.

Of the 15 races, Dongjak B District is garnering the most attention as it is the only by-election race in the capital. Former two-term lawmaker Na Kyung-won of the Saenuri, who was defeated in the 2011 Seoul by-mayoral election by human rights lawyer-turned-mayor Park Won-soon, is running in the most-watched race.

Her opponent from the NPAD comes from the pro-Park group in the Seoul city government.

The constituency, located in southern Seoul, is known to be more supportive of liberal candidates, even though Chung Mong-joon, another high-profile politician in the ruling party, won the seat in the last two elections of 2008 and 2012.

Chung gave up his place in Dongjak B District to run in this year’s Seoul mayoral election.

Another closely watched race is for Suwon C District, in which former opposition party leader Sohn Hak-kyu is running against lawyer Kim Yong-nam, who was fielded by the Saenuri. If Sohn clinches the victory, it is expected that he could tip the balance of power in favor of the opposition given his high-profile status and the potential that he will compete in the 2017 presidential election.

Ahn Cheol-soo, a co-leader of the NPAD, cautiously noted yesterday during a meeting with reporters at a cafe in Yeouido, western Seoul, that the opposition party will consider its performance to be good if it manages to maintain the status quo by winning five races.

“In a realistic perspective, the party could say it did well if it maintained the status quo as the voting turnout is expected to be low as people will be on summer vacation [on election day],” said the former presidential hopeful.