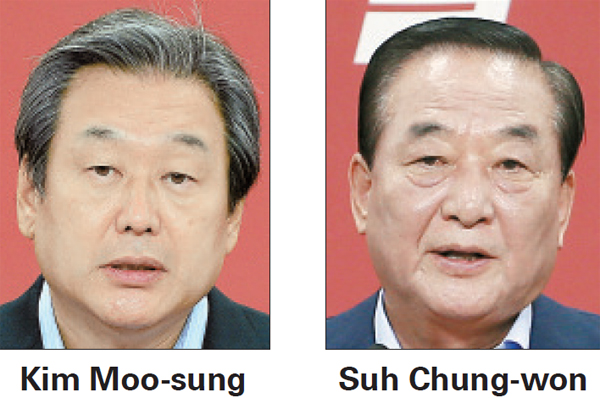 In a last-ditch effort to win the hearts of its members and the general public ahead of today’s Saenuri Party convention, nine ruling party candidates pleaded for support yesterday and claimed that they will help President Park Geun-hye avoid what many see as an earlier-than-expected lame-duck period.

“I promise you that I will not become a party leader entrapped on Yeouido island [where the Saenuri headquarters are located],” said five-term lawmaker Kim Moo-sung, one of the two frontrunners in the race who has been engaged in a fierce contest with seven-term lawmaker Suh Chung-won for the last month.

The lawmaker also pledged during a press briefing yesterday at Saenuri headquarters in Yeouido, western Seoul, that if he gets elected he will be on the front line to ensure success for the Park government and maintain the ruling party’s grip on the Blue House in the next presidential election.

Today’s party convention, in which a new leader and four supreme council members will be elected for the next two years, is seen as pivotal by political analysts as it will reset the tone of the relationship between the Park Geun-hye Blue House and the ruling party, which has been criticized for passively following the presidential office under former leader Hwang Woo-yea.

Though nine candidates are vying for the leadership and supreme member positions, the race is essentially between Kim and Suh, who represent a non-pro Park and a pro-Park faction, respectively, within the ruling party.

The Saenuri currently commands the loyalty of 147 lawmakers, which is three seats short of a majority.

The 71-year-old Suh said during a press briefing yesterday that he is the most suitable leadership candidate to help the struggling Park government in the aftermath of the Sewol ferry sinking and failed personnel appointments.

“As you all know, the politics [of cooperation] has been absent in Yeouido. We must restore it,” said Suh. “I promise that I will lead the party with great momentum to guide national affairs.”

Though both Kim and Suh pledged to help the Park government overcome difficulties amid a recent slump in the president’s approval ratings, it is widely seen that Kim will swiftly move to raise suggestions on - or opposition to - the way the Blue House is leading the country if he is elevated to the powerful position.

On the other hand, Suh, who is nicknamed “the godfather of the pro-Park faction,” will likely throw his full support behind the Blue House if chosen.

Kim deviated from Park loyalists when he openly objected to the president’s firm support of the special administrative city of Sejong during the Lee Myung-bak government.

Park, then a lawmaker of the Grand National Party, the precursor to the Saenuri, protested former President Lee’s plan to turn Sejong into a business hub instead of a special administrative city.

The fact that a new leader will take the helm of the country’s largest party until after the 2016 parliamentary elections has also raised the stakes because whoever succeeds will receive the authority to nominate election hopefuls.

If Kim, who is known for his strong leadership skills, becomes the top party member, it is expected that he will use his term as a springboard to run in the 2017 presidential elections against a liberal candidate. When asked whether he considered running in the country’s biggest election in the past, Kim has never denied the intention.

The Saenuri’s delegates will vote in a one-day convention today at Jamsil Stadium, southeastern Seoul, while its grass-roots members will cast their ballots at 251 polling booths nationwide. It is expected that about 200,000 party members will participate.