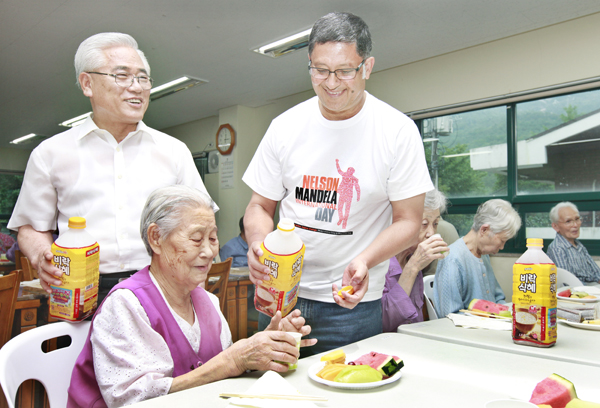 This Friday marks the first Nelson Mandela International Day since the passing of the iconic South African freedom fighter.

Nelson Mandela, the first black South African president, passed away on Dec. 5 last year, and Korea joined the international community to mourn his death and commemorate the legacy he left behind.

This year also holds great significance to South Africa as it celebrates the 20th anniversary of the end of apartheid.

“We can’t talk about democracy in South Africa without talking about Nelson Mandela because he truly is the founding father of the nation,” South African Ambassador Hilton Anthony Dennis said in an interview Thursday at his embassy office in Yongsan District, central Seoul.

Dennis and his embassy staff will host a series of events throughout this week to commemorate the principles and values of Mandela, such as volunteering in both Seoul and Gwangju and reaching out to students.

“Nelson Mandela, in life, was an iconic figure, but in death he became even larger,” he said. “And he has become one of the most well-known individuals in world history.

“Of course, when he passed away, it was a time of deep reflection for us as a society,” he added. “We are celebrating this year, the 20th year of democracy, and we were building up to that at the time that [Mandela] passed way. It was a good moment to reflect on what progress we have made in that journey.”

A year ago, the Korea JoongAng Daily accompanied the ambassador to the Seoul Metropolitan Government’s Surak Old People’s Nursing Home at the foot of Mount Surak in Nowon District, northern Seoul, to commemorate Mandela’s 95th birthday.

There, Dennis and his embassy colleagues volunteered 67 minutes to clean the nursing home and serve food to the elderly, many who do not have family.

In 2009, the United Nations designated July 18 as Nelson Mandela International Day to encourage people to do charitable work for at least 67 minutes - a recognition of Mandela’s 67 years of public service. The embassy plans to return to the nursing home this year to volunteer again on Thursday, following Mandela’s example to give back to society.

“All of our societies, not only Korea, want to develop our countries faster, and we are caught up in this bbali bbali [quicky quickly] culture, and it gives rise to a sort of spiritual vacuum,” said Dennis. “People feel alienated. People feel forgotten. This is a moment to try and say thank you to those who came before us.”

On Friday, which would have marked Mandela’s 96th birthday, Dennis will head to Gwangju City Hall and hold a lecture on the significance of Mandela Day for students and the public. He will also take part in volunteer work, accompanied by the Gwangju mayor.

Dennis said that Gwangju can be seen as “the spiritual home of the pro-democracy movement in Korea” and that “there is no more natural place to go and commemorate Nelson Mandela Day.”

The South African Embassy plans to take Nelson Mandela Day to a different province of Korea each year to spread their volunteer efforts.

The embassy is also holding an annual high school essay contest and will announce the results on Wednesday.

Dennis pointed to the importance of reaching out to the youth, which he said is, “the most important part of Nelson Mandela Day, because it touches the young generation, which was very important to [Mandela]. ...Wherever he went, he always made time to spend with children.

“It comes out of being in prison for 27 years, and I think [Mandela] got the insight that you have to be efficient, but you must also pay attention especially to the younger generation.

“The essay competition is a vehicle to reach out to young people in Korea and hopefully provide an opportunity for them to make assessments and … give guidance to own their lives at a young age,” he added.

The ambassador has been reading the entries from students of five high schools nationwide and remarked he was “struck by the poignant assessments by these children.”

Dennis, too, has made a point to reach out to students and has spoken at more than 100 schools over the past five years of his post in Korea, which comes to an end later this year.

“I spent many years in exile myself in very trying conditions,” said Dennis, who also fought as a freedom fighter. “Like all humans, myself, and many of my peers, young people would sometimes wonder if we would ever have our freedom. So there were moments of sadness and even despair. So, a person like Mandela represented this belief that we just have to carry on because there are those who came before us who are carrying on. He was an example that to struggle for freedom is actually a lifetime commitment.

“He has left his legacy, a profound influence on our country. Our duty is try to live our lives as close as possible to his example.”