FTA negotiators back at table after summit

FTA negotiators back at table after summit 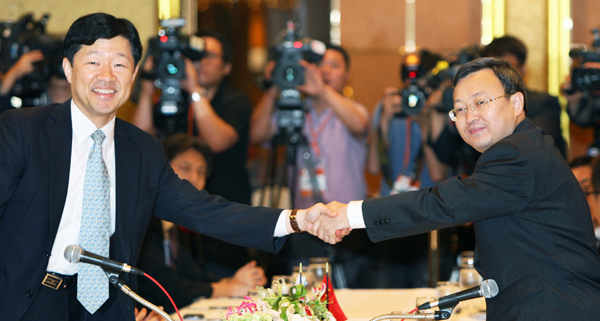 Korea and China yesterday started their first negotiating session since their presidents vowed to complete the bilateral free trade deal by the end of this year.

After an opening ceremony in Seoul, the two chief negotiators, Woo Tae-hee, Korea’s assistant minister for trade, and Wang Shouwen, China’s assistant commerce minister, moved on to Exco in northern Daegu for the 12th official negotiation session scheduled to last through Friday.

Last September, the two countries agreed to open their markets to 90 percent of products and 85 percent in terms of trade amount. But they failed to make further progress in finalizing lists of so-called supersensitive products, the 10 percent of all trade products to protect with tariffs. Korea wants to protect agriculture and fishery products from competition with cheap Chinese imports that are already dominating local grocery stores, while China wants to protect its own petrochemicals, steel and machinery products.

At the 11th negotiation session held in Sichuan Province at the end of May, the two countries did agree to open up the online commerce sector and partially ease competition regulations, which will benefit Korean e-commerce participants and cultural content industries.

According to the Ministry of Trade, Industry and Energy, this week the two countries hope to have “comprehensive and intensive discussion to make progress in all trade sectors, not just products but also in lowering non-tariff barriers in services and investment.”

The FTA is expected to boost Korean manufacturers and some services. If an FTA is put into effect, the nation’s gross domestic product is expected to get a 1 percent boost annually during the first five years and 2.3 to 3 percent after a decade, according to a study by the Korea Institute for International Economic Policy.

A group of more than 5,000 agricultural and livestock farmers from across the country gathered in Daegu yesterday to demand the government come up with measures to protect local farmers from competition. The committee plans to have street demonstrations every day calling for a suspension of trade negotiations.

“We are not pushing for a total scrapping of the FTA,” said Kim Gwang-cheon, director at the Korean Advanced Farmers Federation. “We want the government to include all agriculture and livestock products in the supersensitive products so they can be completely excluded from tariff elimination.”

The farmers wrote in a statement yesterday, “The Korea-China FTA is estimated to generate losses of up to 29 trillion won [$28.5 billion] for local agricultural and livestock sectors after 15 years of the deal taking in effect, up to five times larger than losses suffered under the Korea-U.S. FTA.”