Goetze’s goal gets trophy for Germany

Goetze’s goal gets trophy for Germany 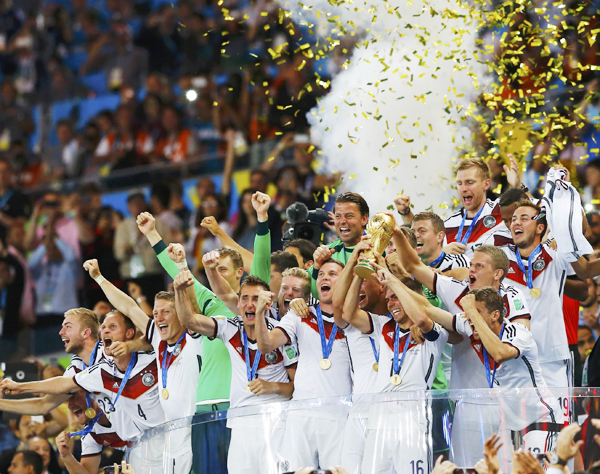 Mario Goetze’s superb extra-time volley sealed a fourth World Cup for Germany with a 1-0 win over Argentina in a thrilling final on Sunday as they became the first European team to triumph on South American soil.

A thunderous third final meeting between Germany, 7-1 conquerors of Brazil in the last four, and bitter rivals Argentina was settled by a stunning goal from substitute Goetze befitting of such an outstanding tournament.

With only seven minutes remaining, and the game seemingly headed for penalties, Andre Schuerrle escaped down the left and sent in a spinning cross that 22-year-old Goetze controlled on his chest before slamming the ball past keeper Sergio Romero.

The magical strike meant Germany broke the South American stranglehold on World Cups held in the Americas, and Goetze became the first substitute to score the winner in the final.

The result also left Argentina forward Lionel Messi without the title he so craved to crown his glittering career.

“All of Germany is world champion now,” the winners’ immense goalkeeper Manuel Neuer said after the Germans added the title to West Germany’s triumphs of 1954, 1974 and 1990.

Only Brazil, with five World Cups, have won the trophy more times.

“We’re going to celebrate for at least five weeks now. At some point we’ll stop celebrating but we’ll always keep waking up with a smile,” Neuer added.

It will be a richly deserved smile.

As badly as all of Argentina hankered for a triumph in Brazil, Germany were worth their win over a subdued Messi and his team mates who counterattacked dangerously but lacked the killer touch in front of goal, failing to get a shot on target.

Messi, attempting to emulate the great Diego Maradona by leading Argentina to a World Cup triumph, had a poor final which was summed up with almost the last kick of the game when he had a chance to equalise with a free kick 30 metres (98 feet) out.

However, the man awarded the Golden Ball as the tournament’s best player never troubled the world’s best goalkeeper, blasting his effort high and wide seconds before the final whistle.

Although the score line was the same as West Germany’s 1-0 win over Argentina in 1990, it never reflected that dour game in Rome and had far more in common with their exciting final in 1986 which a Maradona-inspired Argentina won 3-2 in Mexico City.

Both teams went looking to create chances in an open, attacking match that proved a real contrast in styles.

Germany passed and moved the ball around far more than Argentina who relied on counter attacks but with scant reward.

“We gave it all, all our bodies could endure,” Argentina midfielder Javier Mascherano said. “The pain is immense because we wanted to take the cup back to Argentina.

“The pain will last forever.”

The loose ball went straight to Higuain but, with only Neuer to beat, he dragged his shot embarrassingly wide.

Ten minutes later he swept the ball home after a perfect cross from Ezequiel Lavezzi and went on a long celebratory run thinking he had scored, but he was rightly flagged offside.

Four-times World Player of the Year Messi did have a good chance two minutes after the break when he escaped the shackles of the defence but his angled left-foot shot went narrowly wide.

As the half progressed there was an air of inevitability that the match would move into extra time.

A pivotal moment came in the 88th minute when Miroslav Klose, Germany’s 36-year-old striker who set the all-time World Cup scoring record of 16 goals in the demolition of Brazil, went off to be replaced by the baby-faced Goetze.

Klose, playing in his fourth and last World Cup, was given a standing ovation as he left the field, but an even greater German celebration was drawing closer.

Argentina could have broken the deadlock in the first period of extra time when exhausted defender Mats Hummels allowed substitute Rodrigo Palacio a chance to score but Neuer came out fast and the forward lobbed his effort wide.

The decisive moment was not far away, however, and it gave the World Cup a fitting finale.

Goetze took the ball down on his chest brilliantly from Schuerrle’s cross and sweetly fired home the 171st goal of the tournament to equal the record set in France in 1998.