BMW and Mini cars race on the track at the BMW Group Driving Center in Incheon yesterday. [NEWSIS]

The same day that Germany won the 2014 FIFA World Cup in Brazil, German premium auto brand BMW had another thing to celebrate: the completion of its first driving center in Asia.

The center, located on Yeongjong Island, Incheon, will open to the public next month and anyone can visit to drive a BMW on one of the courses. Korea is the third country to have a BMW driving center, after Germany and the United States.

BMW Group Korea President and CEO Kim Hyo-joon yesterday said that the opening of the center, is a “dream come true” for him and the company.

“As I look to the past, the automobile industry revolved around producers and sellers, but this is changing to a consumer-oriented industry,” said Kim at the opening ceremony yesterday. “I think our vision of not only delivering a premium brand, but also providing a stage to experience [the cars] and setting the ground for a customer-centered market have appealed to both Korea and Germany.”

In addition to the driving center, BMW Group also announced that it will set up a research and development center in Korea. By 2015, the R&D center will have 20 researchers, including employees dispatched from German headquarters.

The R&D center will aim to provide the latest technology to Korean customers, and BMW said it will cooperate with IT and parts companies here.

He said the German automotive group expects more growth in Korea. Despite its small size, Korea is the ninth-largest market for BMW Group and sales of its flagship 7 Series were the fourth highest in the world.

“First of all, Kim was very persuasive with his vision of how to develop the market further,” said Robertson. “The Korean auto environment and customers looking to get a premium experience was promising and it was our strategic decision to go further in Korea.”

Since breaking ground on the project last June, BMW has been emphasizing that the center will take Korea’s driving culture in a new direction. Of the three BMW driving centers worldwide, Korea’s is the first with a brand experience center.

On the first floor of the brand experience center, visitors will be able to see various BMW and Mini models and learn about their history. The second floor has a classroom for what BMW has named its “Junior Campus,” a program designed to educate kids about automobiles and science. There is also a bar and a restaurant with a clear view of the driving tracks. 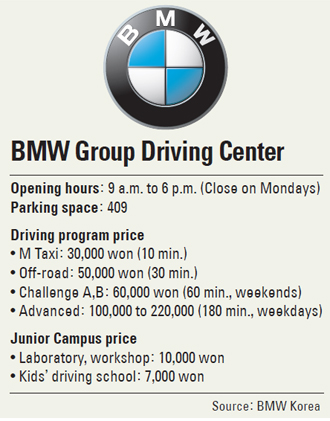 “Imagine a scene where a father drives a car at the track while his children are learning at the Junior Campus and his wife drinks a coffee at the restaurant,” said Kim.

There are six driving courses (multiple, dynamic, circular, acceleration and braking, handling and off-road) and the longest track is 2.6 kilometers (1.61 miles). BMW will have 56 cars available to drive and 14 driving instructors will lead six programs that visitors must pay for.

Two years from now, BMW expects that more than 200,000 people will visit the driving center annually since it isn’t limited to BMW customers.

However, Kim said that there is one roadblock for customers who want to ride their motorcycle to the center. In order to get there from Seoul, visitors need to take an expressway on which motorcycles are prohibited.

“Korea is the only country in the world where you can’t ride a motorcycle on an expressway and this needs to be changed,” said Kim. “We are doing our own research on this subject and once it is finished, we will formally ask the government.”