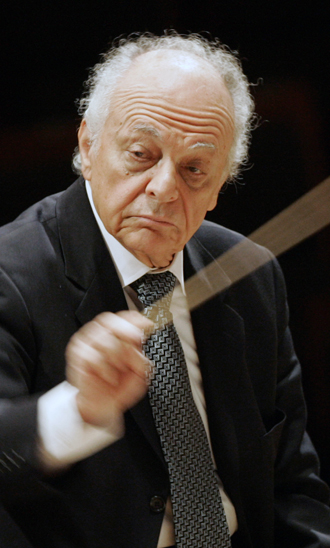 CASTLETON, Virginia - Lorin Maazel, a world-renowned conductor whose prodigious career included seven years at the helm of the New York Philharmonic, died Sunday at his home in Virginia.

Maazel died at Castleton Farms from complications following pneumonia, according to a statement by the Castleton Festival, an annual festival Maazel founded with his wife in 2009. Maazel was rehearsing and preparing for the festival at the time of his death.

Known for his relentless energy and passion for precision, Maazel guided nearly 200 orchestras in at least 7,000 opera and concert performances during 72 years at the podium, according to a biography posted on his website.

Maazel, an American born in Paris in 1930, took his first violin lesson at age 5. A dazzling prodigy, he was 7 when he was invited by Arturo Toscanini to conduct the NBC Symphony. His New York Philharmonic debut came five years later, in 1942. By age 15, he had conducted most of the major American orchestras. At 16, he entered the University of Pittsburgh to study language, mathematics and philosophy and played the violin with the Pittsburgh Symphony to help pay his tuition.

In 1960, at age 30, he became the first American to conduct at the Bayreuth Festival in Germany. He served as artistic director and chief conductor of the Deutsche Oper Berlin for five years starting in 1965.

Maazel also was music director of the Symphony Orchestra of the Bavarian Radio for about a decade until 2002. That year, he was chosen to replace Kurt Masur as music director of the New York Philharmonic - America’s oldest orchestra. Maazel served there for seven years and was with the orchestra at the time of its landmark visit to Pyongyang, North Korea in 2008.

“I am deeply saddened and shocked by the news of Lorin Maazel’s death,” New York Philharmonic Music Director Alan Gilbert said in an emailed statement. “For decades he was a major force in the musical world, and truly an inspiration for generations of American musicians.”

Gilbert added: “Personally, I am grateful to him, not only for the brilliant state of the Orchestra that I inherited from him, but for the support and encouragement he extended to me when I took over his responsibilities.”

A free concert scheduled Monday in Central Park will be dedicated to Maazel, the New York Philharmonic said in the statement

Dominique Mayer, director of the Vienna State Opera, also said in an emailed statement that he was deeply saddened by Maazel’s passing.

“I knew Lorin Maazel as a versatile artist, magnificent conductor and a ... fine person,” Mayer said, calling his work “inspiring.”

Maazel also was a composer, although to lesser acclaim. His first opera, “1984,” based on George Orwell’s novel, met with largely negative reviews.

Maazel founded the Castleton Festival to mentor young musicians and to bring new energy to classical music with performances showcasing young talent. Maazel told the audience on the opening night of this year’s festival on June 28 that working with young artists was “more than a labor of love - a labor of joy,” the festival’s statement said.

Maazel made more than 300 recordings, including works by Beethoven, Brahms, Debussy, Mahler, Tchaikovsky and Richard Strauss.

He won 10 Grand Prix du Disques, according to his website. In addition to his wife, Dietlinde Turban Maazel, the conductor is survived by four daughters, three sons and four grandchildren.