From Harvard to Seoul

From Harvard to Seoul 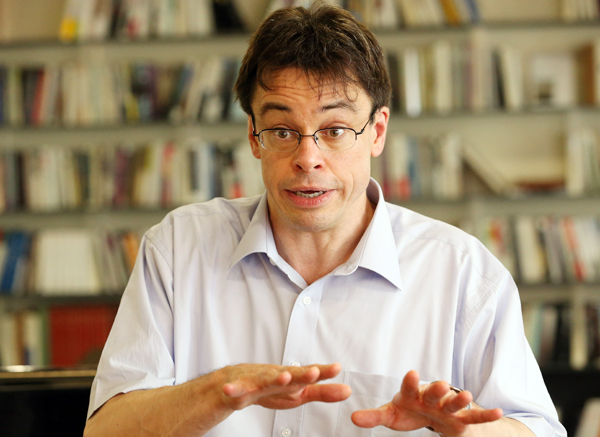 Professor Michael Puett, who teaches the third most popular course at Harvard University, describes his experiences in Seoul in an interview with the Korea JoongAng Daily. By Choi Jeong-dong

A renowned Harvard University professor of Chinese history ended his summer class at Kyung Hee University in an unlikely way: with an apology.

“My generation has utterly failed to solve the world’s most pressing problems,” he said ominously.

Then he closed on a more hopeful note: “This is unfortunate for you [younger generations] but also a blessing, in that you will have to work very hard to figure out the answers yourselves.”

This was Michael Puett’s modest charge to a group of students who took his two-week seminar on East Asian philosophy as part of Kyung Hee University’s Global Collaborative summer program, which brings together professors from around the world to engage students in an intense series of classes and activities on global issues. About 250 students from around the world participated this year, according to the university.

While the immediate topic of his seminar was East Asian religion and philosophy, Puett said his goal was to get students to think about how philosophy will be relevant to contemporary political and economic problems, and even to their own life choices.

He was in Seoul for two weeks until last Saturday, and sat down with the Korea JoongAng Daily to discuss his visit to Seoul.

Q. Why do you think your class on Chinese philosophy has become one of the most popular at Harvard?

A. I think it’s partly about China’s unbelievable economic growth that has raised interest in China generally. As East Asian economies become more important, Asian philosophies and ideas will only become more influential as well. We used to think, in my generation, that we had all the answers from Western traditions, but clearly that’s not the case.

The humanities seem to be under increased threat in universities in both Asia and the U.S. as students look for more practical majors. Will the humanities continue to be relevant?

We hear constantly about the decline of the humanities, and I think it’s true that universities are increasingly focused on science and practical classes, especially in a more competitive economy. But the reason I’m not so dire is that - precisely because of this career pressure - students are becoming increasingly interested in the big questions again: How to lead my life? What kind of society should I help build?

The key for the humanities is to continue to address big questions. This summer, we discussed topics like the relevance of Confucianism and [Daoist philosopher] Zhuangzi to the modern world. The students here at Kyung Hee have been incredibly engaged and eager to discuss these big topics.

Looking at modern East Asia, it’s hard to see the influence of traditional philosophies. Is this accurate?

I think you’re right. But the future is up for grabs. All major political movements in East Asia of the past century have basically originated in Europe, from communism to our so-called liberal democracy. China has been pushing a Confucian revival, and while so far it has been only a means of legitimizing the state, I think down the road you will begin to see a turn of East Asian countries to their past philosophies for answers.

You’ve said that China’s ancient bureaucracy and its success at separating wealth from political influence is one of the greatest accomplishments of East Asian political philosophy. What do you make of the scale of Chinese corruption today?

Look, corruption is endemic to any society. It’s something East Asian states have struggled with constantly. For any state, the question arises of how to define who has political power.

In America, we looked to democracy as a system that could allow social mobility. You still have a political system based on wealth, but there is more flexibility on who can gain that wealth - now it’s getting less so, but that was the idea. In China, they looked to meritocracy to achieve similar goals, to have an educated elite that is divorced from moneyed interests.

However, the only way this can be successful is if corruption is curtailed. Throughout history there were successful examples of this: raising officials’ pay to discourage bribes [like present-day Singapore’s model] or moving officials to different regions to prevent them from accumulating connections to local moneyed interests.

Today, corruption is endemic in China, and Xi Jinping correctly sees that the only way for the state to survive is to somehow control corruption. If China is successful, they might create a powerful state that gains its support through effective governance. China could see nightmarish scenarios of state collapse if it doesn’t control corruption, but I think there are models in China’s history that could provide a path forward for them.

So you’re not optimistic about democracy?

In its current state, democracies around the world, including the United States, have been unable to deal with fundamental problems like wealth inequality, climate change and infrastructure. When democracies become so controlled by moneyed interests, they cease being able to deal with these problems. We could think about building more meritocratic institutions into democracy. I still think democracy is generally a good thing!

Xi Jinping and his wife referred to the popular Korean drama “My Love From the Star” on their recent Seoul visit. Is an “East Asian cultural sphere” going to replace Western global culture? What is Korea’s role?

I think it could be the beginning of an East Asian integration not so dominated by the United States. But I think Xi Jinping’s visit underscores the problems. Clearly its part of a Chinese goal to realign power in Asia. But many countries view Chinese hegemony as no better than U.S. hegemony or even worse. South Korea could play a large role in fostering an East Asian integration that is not dominated by one power. Korea is geographically, culturally and politically in between China and the U.S. Because of its history, it isn’t viewed by anyone in Asia as harboring hegemonic aspirations [like Japan or China].

You specialize in religious thought as well. What’s your take on the continued importance of religion in East Asia?

The ongoing religious revival in China and Korea’s continued religious vibrancy are both challenging our previous assumption that societies inherently become more secular as they modernize. Europe is increasingly looking like the exception rather than the rule in this case. You are seeing a resurgence of interest in indigenous religions in China, but also growing interest in Christianity, just like Korea has in the 20th century. Religion can sometimes spark extremist ideology, but it can also aid in cultural exchange and cosmopolitanism.

Does East Asia’s historical experience of religion hold any clues for the near future?

I do think Asian religions have been less focused on strict adherence to doctrines than Western religions, and more focused on practice, and a willingness to see different religious traditions as valid. Historically in China, you’ve had a merging of Confucianism, Daoism and Buddhism. “Journey to the West,” popular across East Asia, is a perfect example of this. It’s a Daoist text written in China, but it’s about Buddhism.

It’s now an archetypal work in China, Korea and Japan. I think that it does provide a model for how East Asia may be able to integrate cultural influences, including Christianity. Everything from K-pop to these varied religious traditions is part of the new East Asian sphere.