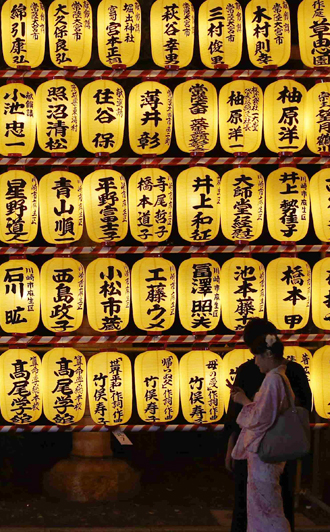 A couple look at photos they took during the Mitama Festival at the Yasukuni Shrine. [REUTERS/NEWSIS]

Japanese Prime Minister Shinzo Abe indicated in a recent interview that he may make a return trip to the Yasukuni Shrine despite fierce international backlash over his controversial visit last year.

Japan’s ruling Liberal Democratic Party Vice President Masahiko Komura told Kyodo News last week that he had told an unnamed Chinese official in May that he does not believe Abe will make another visit to Yasukuni, which enshrines 14 Class-A war criminals from World War II along with its war dead.

However, Abe refuted this remark in an interview published on Monday, when he told the Mainichi Shimbun, “That is only Komura’s opinion, and I don’t know about it.”

When asked if he plans on visiting the Yasukuni Shrine on the Aug. 15 anniversary of the defeat of Japan during World War II, Abe added, “I will continue to hold respect for those who fought and nobly sacrificed their lives for our country.”

But he refrained from remarking on whether he will visit the shrine again. Abe made an unexpected visit to the shrine in Tokyo on Dec. 26, which was interpreted as a glorification of Japan’s colonial aggressions and provoked fierce backlash from Seoul, Beijing and Washington.

During the annual spring festival, Abe skipped a visit to Yasukuni and made a customary ritual offering, but observers remain concerned he may make a repeat visit in the future.

Amid continued concern among neighbors over the actions of the right-wing Abe administration, which consistently appear to downplay Japan’s wartime atrocities, five of Abe’s Cabinet members paid their respects at Yasukuni during the ongoing four-day Mitama Festival, an annual Shinto festival that kicked off Sunday.

The Seoul-based East Asia Institute and Japanese think tank Genron NPO last week revealed the results of a joint study on mutual perceptions of Koreans and Japanese, which was conducted from May to June last year. Some 70.9 percent of Koreans surveyed said that their impression of Japan was “not good” or “generally not good.”

Japan’s apparent refusal to repent for its occupation of Korea and its claim to the Dokdo islets were cited as the top two reasons.

Likewise, 54.4 percent of the Japanese surveyed said that their impression of Korea was not good, the top reasons being Seoul’s criticism of Japan over historical issues as well as the Dokdo issue. This is a drastic increase from 2013, when only 37.3 percent of Japanese respondents claimed to have a negative impression of Korea.

The survey questioned 1,004 male and female Korean adults aged 19 or older, and more than 1,000 Japanese adults 18 and older from May to June.