About 100 missiles fired by North into East Sea

About 100 missiles fired by North into East Sea 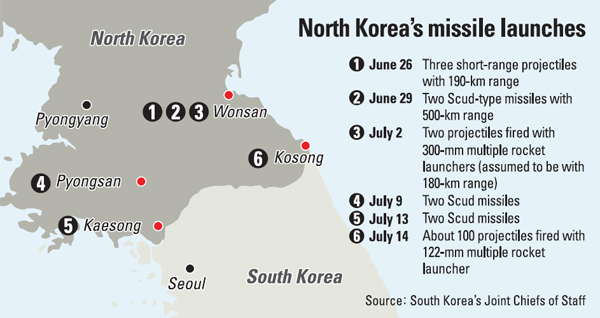 North Korea fired about 100 short-range projectiles toward its waters in the East Sea from a launch site close to the inter-Korean border, Seoul officials said yesterday, while it fixed the schedule with Seoul to hold talks to send its athletes and cheerleaders for the upcoming Asian Games.

An official from the South’s Joint Chiefs of Staff told reporters at a briefing yesterday that the North Korean army launched about 100 artillery shells and rockets, assumed to be from 122mm or 240mm multiple rocket launchers, between 11:43 a.m. and 12:15 p.m. from a base behind Kuson Peak in Kosong, an eastern coastal county in Kangwon Province.

Kuson Peak is just 3.5 kilometers (2.17 miles) away from the Military Demarcation Line, the inter-Korean border, and near Mount Kumgang.

The projectiles flew for three to 50 kilometers, the official said. All of them crashed into North Korean waters between about one and eight kilometers above the border between the two Koreas.

“There was no specific move from the North Korean army after the firing ended at 12:15 p.m.,” the official said. “We are analyzing the weapons that North Korea used and the spots where the shells landed.”

The official added that it was rare for North Korea to carry out live-fire exercises close to the maritime boundary off the east coast.

“Although there have been several firings with multiple rocket launchers off its east coast before, it is rare for North Korea to fire at a place close to the boundary,” the official said. “We are checking the purpose of the firing based on the possibility that North Korean leader Kim Jong-un watched and guided the launches on the spot.”

Seoul officials told reporters that they were tipped off that North Korea was preparing another live-fire drills near Nampo, a western coastal city near Pyongyang.

Pyongyang reportedly possesses thousands of old multiple rocket launchers, which are unguided, self-propelled artillery systems that can fire many short-range projectiles simultaneously to barrage a nearby target.

Although the accuracy of the launcher is low, a projectile fired from one of them is difficult to intercept or detect in advance due to its low altitude, according to the South Korean military.

The launchers mostly have no missile-guidance system, but North Korea recently claimed in a June 28 media report that leader Kim Jong-un had directed the test firing of cutting-edge, ultra-precision missiles just one day after the regime fired three projectiles with what was assumed to be a 300mm multiple rocket launcher.

Since June, North Korea fired off a series of short-range projectiles, including what were assumed to be Scud-type ballistic missiles, mostly near its eastern coastal city of Wonsan, Kangwon Province.

However, since this month, the regime has varied the launch sites to the western city of Pyongsan in North Hwanghae Province and to the more strategically important city of Kaesong on Sunday.

Antonio Inoki, a Japanese lawmaker who recently visited North Korea to boost relations in sports, told reporters at the Beijing Capital International Airport on his way home yesterday that he met with Kang Sok-ju, a secretary of North Korea’s ruling Workers’ Party, during his visit, the Japanese-language Kyodo News reported. Kang told him that the recent launches were not protesting against any Japanese action, but against the two allies’ joint exercises.

Seoul and Washington will hold trilateral naval drills on July 21 and 22 in international waters off Jeju Island, dubbed “Search and Rescue Exercise” (Sarex), which Japan will also participate in.

The USS George Washington, a 97,000-ton, U.S. aircraft carrier, arrived in the southern port city of Busan on Friday. North Korea denounced the arrival of the supercarrier as “reckless military moves.”

North Korea has also protested the upcoming Ulchi Freedom Guardian exercises between Seoul and Washington, scheduled to start in mid-August.

Yesterday’s launches came just hours after the regime agreed with South Korea to hold official talks about sending its athletes and cheerleaders to the Incheon Asian Games in September.

South Korea’s Ministry of Unification confirmed yesterday that Pyongyang accepted Seoul’s counterproposal to hold low-level talks on Thursday to discuss the regime’s dispatch of its national team and a “large-scale” cheerleading squad to the upcoming sports event in Incheon, a western port city of South Korea.

“Kim Jong-un has called for improving inter-Korean relations since early this year, but relations are still soured,” a high-ranking South Korean Defense Ministry official said. “So he appears to be sending the message to Seoul, ‘Choose between dialogue or a war.’”