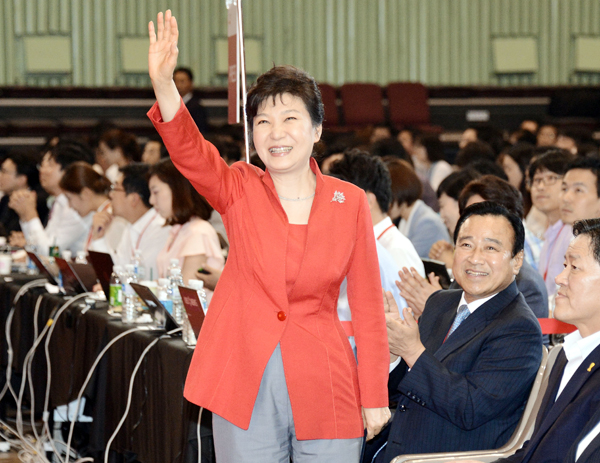 President Park Geun-hye waves yesterday during the Saenuri Party convention in Jamsil Stadium, southeastern Seoul. It is the first time a president has shown up at the ruling party convention in six years. She said earlier in the day at the Blue House that the preparatory committee for the unification of the two Koreas would be launched today. [NEWSIS]

President Park Geun-hye’s ambitious preparatory committee for the unification of the two Koreas will officially be launched today to outline overall principles and discuss effective measures for the consolidation of two nations, which have been divided for the past six decades.

In her speech marking the first anniversary of her inauguration on Feb. 25, Park declared that she would launch such a committee. In the same address, she also introduced her key catchphrase “unification is the jackpot.”

At the time, the president said that a variety of specialists and civic activists in foreign affairs, national defense, economy and social sectors would participate in the committee to gather public opinions on unification and devise detailed plans. However, the launch of the committee has been postponed since then, due to the tragic sinking of the Sewol ferry in April as well as a series of military shows of force by North Korea this year.

A list of about 70 committee members is expected to be released today.

Park has said she will chair the committee herself and appoint two vice-chairmen, one each from the public and private sectors. Unification Minister Ryoo Kihl-jae has been already tapped from the public sector. The other vice-chairman has yet to be named, though possible candidates include: Kang In-duk, a former unification minister; Lee In-ho, chairwoman of the Asan Institute for Policy Studies’ board of trustees; Ha Young-sun, chairman of the board of trustees of the East Asia Institute; and Hong Sa-duk, head of the Korean Council for Reconciliation and Cooperation.

Several high-profile specialists are also expected to be included on the committee, such as Moon Chung-in, a political science professor at Yonsei University and Park Myoung-kyu, the director of Seoul National University’s Institute for Peace and Unification Studies; and Ra Jong-yil, a former national security advisor at the Blue House.

At a meeting with her senior secretaries, Park urged them to do their best, as her new cabinet members make their official start this week.