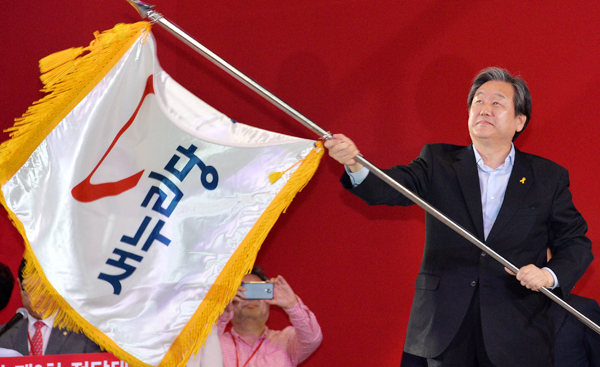 Saenuri Representative Kim Moo-sung waves the party flag after he was elected as its chairman yesterday at the convention in Jamsil Stadium, southeastern Seoul. The ruling party’s new leader pledged to help the Park Geun-hye administration succeed. [NEWSIS]

The ruling Saenuri Party yesterday elected five-term lawmaker Kim Moo-sung as its chairman for the next two years, signaling a significant change in the way the conservative party will communicate and work with the Park Geun-hye administration.

Kim pledged on Sunday in a final rally for support that he will help the president avoid what many see as an earlier-than-expected lame-duck period amid a slump in her approval ratings.

Kim, who represents a district in Busan, defeated seven-term lawmaker Suh Chung-won with 52,706 to 38,293 votes, ending a heated race with his 71-year-old rival by maintaining the lead he saw throughout the campaign.

“I humbly accept this responsibility and will entrust myself to completing the promises I made,” the new chairman said in an acceptance speech at the party convention, held inside Jamsil Stadium in Songpa District, southeastern Seoul.

“The Saenuri must work hard to improve the livelihoods of the people and create jobs for the young,” he continued. Kim added that the ultimate task as party leader would be to help the Park government succeed and maintain the Saenuri’s grip on power through the 2017 presidential election.

Of the nine candidates running for five leadership positions within the Saenuri, including the chairmanship, the three who received the most votes from party delegates, grass-roots members and the general public after Kim took up the remaining four posts.

Kim Eul-dong, an actress turned politician, was automatically elected into a supreme council position, as one senior spot was reserved solely for a female candidate. She came in sixth, however, with 14,590 votes.

Kim’s elevation to the top echelon of the party comes as a sense of crisis has engulfed both the Saenuri and the Park administration following a series of embarrassing failed cabinet appointments and its inadequate handling of the Sewol ferry disaster, which left more than 300 people dead or missing, mostly high school students.

With Kim taking the helm of the country’s largest party, which commands the loyalty of 147 lawmakers, the conservative party is expected to raise more suggestions - or opposition - to the way the Park Blue House is leading the country.

Kim openly stated during the campaign that a Saenuri Party led by him would aid the government as best it could, but would also issue firm objections when necessary.

Kim previously stated that the Saenuri Party led by former Chairman Hwang Woo-yea had been too passive in following policy guidelines by the presidential office, noting that the party had “failed to complement the right balance of power with the Blue House.”

Kim promised many times to restore regular meetings between the Saenuri chair and President Park and made it clear that a ruling party headed by him would make its demands to the president known.

The fact that Kim is widely considered a potential Saenuri presidential contender has also led many to wonder whether he will pursue his own brand of politics as the leader of the ruling party - an approach that could cause the Saenuri to veer from the political path favored by President Park.

During his campaign, Suh pointed out that Kim had aspirations to run in the next presidential election, implying that an ambitious Kim would only use his two-year tenure mainly as a springboard toward the country’s highest office.

In the past, Kim has never denied his intention to run for the presidency.

Kim is known for his strong leadership and was once a Park supporter during the 2007 presidential election campaign, in which she was later defeated by former President Lee Myung-bak in the primary.

Kim, however, deviated from Park loyalists when he openly objected to Park’s firm support in establishing the city of Sejong into a special administrative city during the Lee government.

Park, then a Grand National Party lawmaker, the precursor to the Saenuri, protested Lee’s plan to turn Sejong into a business hub rather than a special administrative city.

Many observers believe Kim’s departure from the pro-Park faction cost him the nomination in the 2012 general elections on grounds that he had shifted his alliance toward Lee.

However, the party rehired Kim to head its presidential campaign in December 2012 and nominated him in a by-election the following year, which he won.

The fact that he will lead the Saenuri until after the 2016 parliamentary elections has also significantly raised Kim’s political stature within the ruling party, as he will have great influence in doling out nominations two years from now.

But another highlight of the convention yesterday was President Park’s presence.

Standing on a podium amid thundering applause from party members, Park, dressed in red - the Saenuri’s official color - said her government would actively cooperate with the new leadership to pursue its national affairs agenda. “The new leadership that is to be elected today by your votes will be tasked with the overwhelming mission of carrying out major reforms in Korean society,” Park said before enthusiastic party members, adding that the country’s deep-rooted social ills had been laid bare following the Sewol sinking.

Park’s visit to the convention yesterday was seen by some as her tactical endorsement of Suh Chung-won, nicknamed “the godfather of the pro-Park faction” within the party.

It was the first time in six years the ruling party has had a president pay a visit to its convention. Former President Lee Myung-bak visited the convention during the first year of his term in 2008.

It was speculated that Suh was favored by the Blue House for his closeness and allegiance to the president, who has suffered a significant slump in popularity. Though she is only 17 months into her presidency, many political observers have already predicted an inevitable lame-duck period.