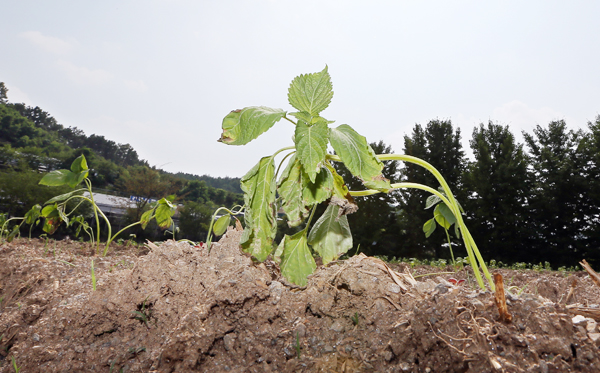 Perillas wither in the prolonged drought. Rain is forecast in the south throughout tomorrow and Wednesday, but it will not be enough to bring relief. [NEWS1]

The central part of Korea has been hit by a severe drought, according to information from local weather authorities, drying up not only drinking water but also supplies used for agricultural purposes.

Due to water shortages, farmers with rice paddies totaling 20 hectares (49 acres) inside the Civilian Control Line near the border between the two Koreas were unable to transplant their rice, which should have been done in May or June.

The drought has also dried up reservoirs, with the Goryeo Reservoir and Naega Reservoir in Ganghwa County, Incheon, having exposed, cracked beds and weeds sprouting up.

Six of the 31 reservoirs in the county are dried up, while the rest have only a 35 percent water reserve, half of last year’s rate of 70 to 80 percent.

According to the Korea Meteorological Administration (KMA), the country’s central region had 114.2 millimeters (4.4 inches) of average precipitation between June 1 and June 13 - about 43 percent the annual average during the same time last year at 268.4 millimeters.

“We had relatively less snow last winter and less rainfall this year,” said Kwon Tae-gil, an official with the county office. “Because of the drought, sweet potatoes, perillas and chillies planted in the ground are withering.”

Southern Korea experienced monsoon rains for a few days, though precipitation stayed at 16.5 centimeters, still below the annual average.

The KMA forecast that the monsoonal front will bring rains to Jeju Island and the southern regions from tonight and to the central parts throughout tomorrow and Wednesday. But it added the rainfall would not be enough to bring the drought to an end.

The drought threatens those who live on high ground, as it has dried up valley waters, their only water source. The remote Hangilga, Wondaeri and Sangsonghan Villages in Jecheon, North Chungcheong, have suffered as valleys in the area have run dry. Residents there have had to rely on water supply vehicles dispatched by local suppliers. Though it is enough for their daily routines, it has not been enough for them to maintain their crops.

The situation is much worse in a village located next to Soyang Dam in Inje County, Gangwon. The water there ran dry in early May, drying up 10 and 30 ton water tanks in the village. The Inje Fire Station is currently providing drinking water. The dry climate has had an adverse effect on corn production, and the plants are too low quality to sell, villagers say.