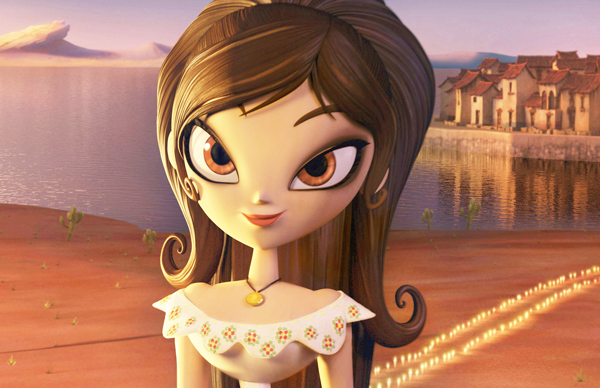 A scene from “Book of Life.” [AP/NEWSIS]

LOS ANGELES - Guillermo del Toro is helping to open the “Book of Life.”

The Oscar winner is producing the animated feature by first-time director Jorge Gutierrez, and joined him at Fox Studios on Monday to unveil footage from the film, set for release in October.

“Book of Life” is rich with imagery from Mexican folklore, with a special emphasis on the Day of the Dead, the food- and music-filled celebration of the annual return of the spirits of deceased loved ones.

Del Toro said he was moved by Gutierrez’s emotional, visual and narrative connection to Mexico.

“It was a huge nostalgia,” del Toro said, “a very painful and beautiful nostalgia that made me say I’m going to protect this project and celebrate this guy.”

It helped that Gutierrez presented his ideas and illustrations over “a trunk of tequila,” the filmmaker said.

“Book of Life” centers on two best friends angling for the girl of their dreams, not realizing that otherworldly powers have a stake in the outcome. The leaders of the underworlds, the Land of the Remembered and the Land of the Forgotten, make a wager on which lover the girl will choose.

The approach to music and animation is unique, del Toro said. “It’s enchanting and gorgeous in a way that is not the cookie-cutter way,” he said.

Colorful sugar skulls - the traditional Day of the Dead treat - inform the fantastical look of the Land of the Remembered. Other Mexican folk arts, like handcrafted wooden dolls, are represented in the film’s everyday world.

“I’m not supporting a movie that is going to look like every other movie, that’s going to sound like every other movie,” del Toro said, adding that he tries to specialize in producing first-time filmmakers to add to the diversity of voices in cinema. “Every time we did something unique, I felt very proud of him. He’s like my love child without the love.”