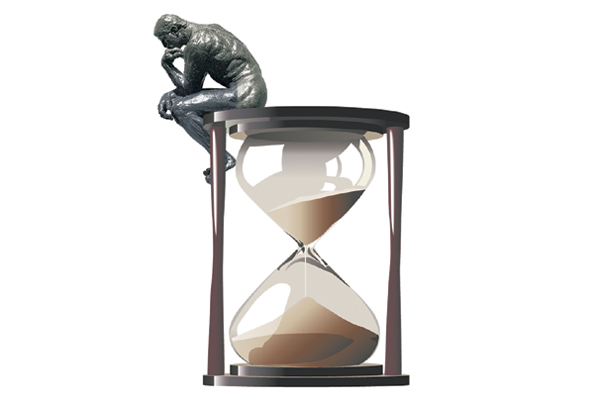 This cannot be normal - my habit of putting off an inescapable painful or difficult task. If it cannot be avoided, the sooner I get it over the better. Right? But easier said than done. I sit on it. I recline on it. I hide from it as long as possible making up endless excuses. Despite the accompanying dread of an uncompleted task that is bound to get more irksome the more it’s delayed, I can’t even get myself to the dentist. That is why I end up with more and more implants.

In his essay “Being Blown with Wind,” Japanese novelist Hiroyuki Itsuke writes, “With a blank writing pad in front of me, I start sharpening two or three pencils and then end up cutting all my fingernails and toenails. Then I notice grey hairs on my head or pluck out nasal hairs, which I then try to put on the face of my cat. By the time I pick up my pen again, I have used up valuable time and energy to write.”

I gasped with both recognition and a sense of relief from the thrilling sense of sympathy I had with the veteran writer’s confession about the agony of writing and the excruciating ritual of procrastination before putting pen to paper. Even though we are well aware that time does not wait just because we cause deliberate delays, we waste time doing meaningless acts like clipping toenails or planting nose hairs onto a cat. Deadlines near in large strides like a creditor out to collect his due. But I am still thumbing through a book of essays instead of hitting the keyboard. This must be not healthy.

I kept up my grades as a student by cramming for tests. I would stay through a single night writing a month’s worth of diary entries before a school break ended. I heard the nagging of my teachers telling us all to study more consistently, but I was never able to shake off my habit of putting off hard or unpleasant duties until the last minute. I’m not sure if I was born lazy or simply got scared.

You have to live with a sickness if you can’t beat it. So you might as well see its bright side. I justify my habit of procrastination by invoking the law of conservation of energy - the theory that energy cannot be created or destroyed, but is simply transferred or transformed from one form to another. Whether I do a task in dogged, regular intervals or all in one go, I will use the same amount of energy. It’s simply a matter of choosing how to distribute and concentrate the labor and pain. One way is no better or worse than the other, I claim. I comfort myself that these habits do not make me worse than the more responsible human beings on our planet who listened to the teachers way back when. We’re all God’s children, right?

The catchphrase since the tragedy of the Sewol sinking that left more than 300 dead has been “normalizing the abnormalities.” Society entered into deep soul-searching after the loss of so many lives, mostly young students. The government and public became united in a call that said the country cannot march on if it doesn’t fix the incongruities, flaws and corrupt malpractices that were condoned, hidden and neglected for so long. In a teary address, President Park Geun-hye promised a rebirth of government and public policies to make the country safer and more reliable. The work involved 140 policy tasks across 10 areas.

But practices are a different matter. When we refer to certain “practices,” it somehow has a bad connotation. Not all practices are bad. Judgments of them can differ depending on perspective. One person might find nothing out of the ordinary in a particular practice, while another can deem it abnormal. Just because the practice has been carried out for years and is commonplace, it should not be automatically stigmatized.

It is normal for people in Africa to have dark skin. It is more common to have fairer skin in Europe. The color of skin cannot be a matter of judgment. They are simply different. Differences should be respected, not judged or discriminated against. The moment one defines a difference as something out of the ordinary, society runs the risk of losing its tolerance.

Last week, President Park met with floor leaders of both the ruling and main opposition parties. The rare scene of the president pleasantly chatting with opposition party members earned her praise. But the fact that it was news is odd because it should be perfectly normal for the president to regularly meet and communicate with lawmakers in a democratic society. In order for the slogan “normalizing abnormalities” to gain any traction, the president should set an example. The meeting with floor leaders should be a starting point. She ought to meet people from diverse classes and fields and recruit a variety of people into her government.

And yet, the bad habit of procrastination would not be all that bad because inspiration - the very source of imagination and creativity - tends to visit you at the last moment. That’s the magic of creation, which is a very painful job.