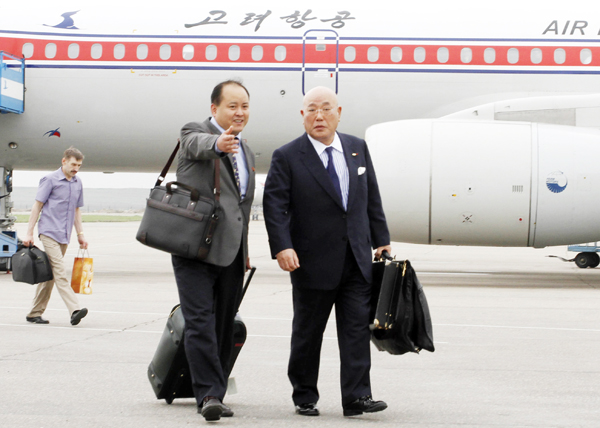 Japanese Prime Minister Shinzo Abe is setting a record for not making a cabinet reshuffle. He hasn’t changed a single cabinet minister 567 days after his inauguration. This is especially surprising as he frequently changed members when he served as prime minister the first time.

So, what is his secret? A close aide of Abe recently said: “The answer is obvious. He has Isao Iijima (right, in the photo), a special cabinet advisor, on his side.” Iijima was the right-hand man of former Prime Minister Junichiro Koizumi, whom he served as a secretary for 34 years. He was the secretary for political affairs for five years and five months throughout Koizumi’s term. He would be equivalent to Lee Jae-man, the presidential administrative secretary and a member of “Manmanhoe,” a rumored secret power group.

Iijima has played various roles, and the key for him was to keep records of people. He scheduled meetings for Koizumi to meet various people and often made the prime minister have two dinners a day. In fact, the prime minister often had 10 meetings a day. Iijima also arranged meetings with people who didn’t share Koizumi’s view.

But giving Koizumi opportunities to listen to different voices was not the only purpose. Iijima and Koizumi thoroughly checked the qualifications of the people the prime minister met. It was a preliminary screening for appointments. Koizumi and Iijima shared the philosophy that a five-minute face-to-face meeting offered better judgment than reviewing a report 100 times. Iijima constantly updated other information such as financial transactions. Based on the survey, Iijima marked the candidates A, B or C for Koizumi’s consideration. Koizumi never appointed anyone who got a “C” from Iijima when he was prime minister.

Thanks to the careful appointment decisions, the Koizumi government enjoyed high approval ratings. And Abe witnessed the situation closely.

Before he was inaugurated in December 2012, Abe was searching for someone like Iijima. When he couldn’t find anyone, he invited Iijima to join his Cabinet, and the Iijima file continues to provide wise advice. The ongoing preparation allowed the Abe government to set a record in keeping its original lineup.

Television viewers are not the only ones disappointed by the appointment confirmation hearing last week. It is pathetic that candidates who don’t even have the minimum ethics and competency are nominated. It is obvious that there was no face-to-face verification. If the president had met the candidates in person for five minutes, vain efforts could have been saved.

As the president is accustomed to reading reports, the aides are buried in papers and documents. It is ridiculous to keep up with the style. The administrative secretary and the Chief of Staff now have an obvious job. They need to keep the president’s schedule busy. The president should have more face time with aides and outside figures. Even if the president doesn’t like it, they must make her meet people. It is their duty and reason for existence.

*The author is a Tokyo bureau chief of the JoongAng Ilbo.