Pursuers of beauty beware: the same cosmetic product can have widely different price tags depending on where it is sold.

The JoongAng Ilbo compared the prices of 13 domestic and foreign cosmetic products based on their distribution channels, and the results were all over the map.

It selected three online shopping malls known for cheap prices - Gmarket, Auction, 11th Street - and two Internet duty-free shops, Lotte and Shinsegae. Prices in the duty-free shops were converted from U.S. dollars to won with the exchange rate of 1,011.9 won ($0.98) against the dollar from July 13.

There was a 1,000 won to 6,000 won gap in prices of basic domestic cosmetics products in online malls and the online duty-free shops. 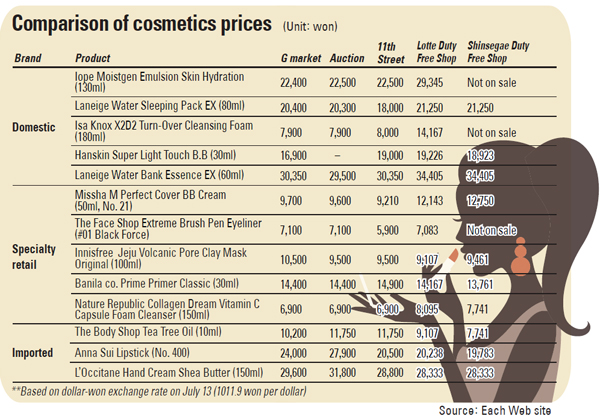 In fact, prices at duty-free shops are more affordable these days due to the appreciation of the won against the dollar, yet the online markets were still much cheaper.

On the other hand, retail cosmetic brands had price tags all over the map, which shows how tricky it is to be a smart shopper.

“Since distribution routes and the number of businesses importing cosmetics have greatly increased, customers can dramatically reduce the amount they spend depending on where they buy their products,” said Park Ju-Sang, beauty team manager at Gmarket. “It’s also a good idea to take advantage of hot deals that give temporary discounts.”