Gov’t develops robot to put the sting on jellyfish

Gov’t develops robot to put the sting on jellyfish 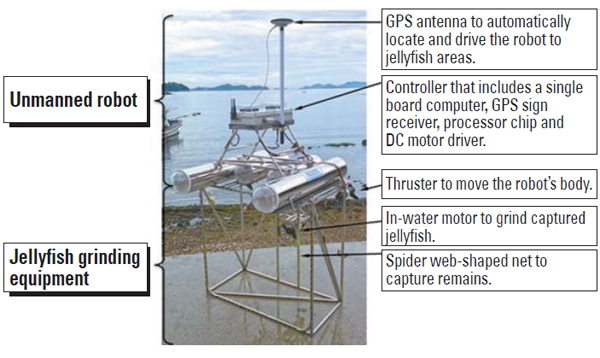 The Ministry of Oceans and Fisheries yesterday said it is developing a robot that will try to locate, grab and grind up jellyfish.

The ministry estimates the robot could save 3 billion won ($2.9 million) for fishermen, whose nets fill with unmarketable jellyfish when water temperatures rise, and 100 million won for the government, which currently spends that amount annually to control the jellyfish population.

A floating “smart buoy” controlled by GPS transmits where jellyfish are concentrated, while the underwater part of the robot captures and grinds them up.

“The automated jellyfish control system centered around this robot will enhance our public mechanisms to get rid of them efficiently, preventing beach visitors from getting stung and reducing financial damages on fishermen,” said Seo Jang-woo, director general of fisheries resource policy at the ministry. “This summer, the ministry is trying to reduce cases of damages by installing a jellyfish web shield until the robot is completed. We already installed one at Haeundae Beach in Busan.”

The 110 million won project is funded by the fisheries and science ministries. Rastech, a Daejeon-based robot developer start-up, is building the device .

Three robot units are scheduled to be deployed for trial operation in Masan Gulf, South Gyeongsang, in November. If the test is successful, Rastech will make nine robot units.

Beach visitors will see the robots next summer as the ministry plans to deploy them from April through September.

According to data from the National Fisheries Research and Development Institute and Health Ministry, about 240 people were treated from jellyfish stings on Korea’s southern coast, including Busan, South Gyeongsang, South Jeolla and Jeju Island, 62 people on the east coast and 59 on the west coast.