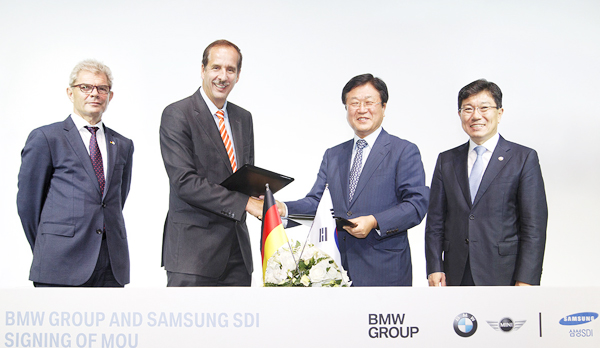 Bayerische Motoren Werke AG, the world’s largest maker of luxury cars, agreed to spend billions of euros increasing its orders of Samsung SDI batteries that will go in BMW’s line of electric vehicles.

Shares of Samsung SDI, a unit of Samsung Group, rose to the highest level in more than seven months of trading in Seoul after the announcement. The deal is worth “multibillions of euros,” the battery maker said in an emailed statement, without giving the exact value.

The deal paves the way for BMW to secure a supply of batteries - the most expensive part of an electric vehicle - as it rolls out its i8 plug-in hybrid and i3 electric car to challenge Tesla Motor’s Model S. For Samsung SDI, which supplies batteries to Apple, the order builds on the company’s plans to expand its automotive business months after agreeing to acquire Cheil Industries for 3.5 trillion won ($3.4 billion).

“Expanding its supply track record will help Samsung SDI as it tries to increase its customer base,” Lee Sang-hyun, an analyst at NH Investment & Securities, said by phone. “The deal will help SDI have greater presence as an electric car battery maker in the U.S. and Europe, where it is relatively less well known compared with other battery suppliers.”

Samsung SDI also said it will continue to supply batteries for BMW’s i3 and i8, and other hybrid models, for “several years.”

Samsung SDI rose 0.58 percent to 173,000 won on the stock market. The shares have gained more than 7 percent this year while the benchmark Kospi index is little changed.

Sales of hybrids and electric vehicles are projected to grow steadily to reach 5.2 million units by 2020, or 7.3 percent of all passenger vehicles, according to a November 2010 report by J.D. Power & Associates.

According to Japanese research firm B3, the global market for automotive lithium-ion batteries will increase to $21.3 billion in 2020 from $4.4 billion in 2014.

A battery normally takes up 30 to 40 percent of the vehicle’s manufacturing cost.