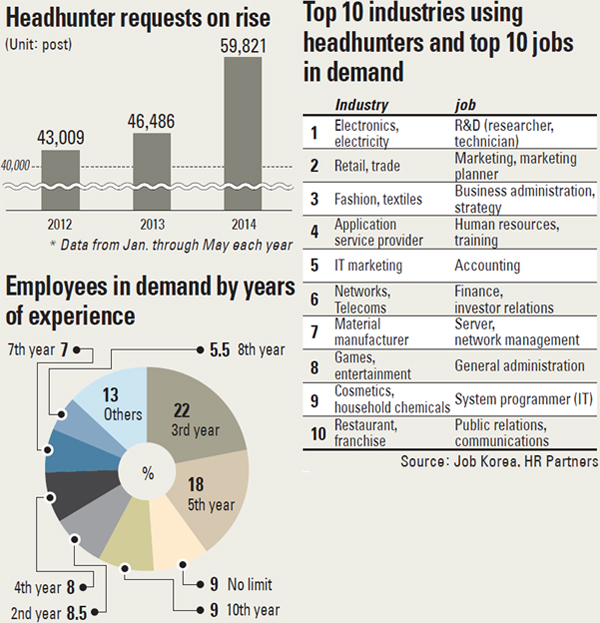 Korean companies are showing more interest in hiring highly productive junior-level workers due to stagnant domestic recovery and a changing employee culture in which younger workers are often looking for new and better job opportunities.

According to a study by local recruitment portal Job Korea, in which the company analyzed 60,000 headhunting requests made on its website during the first five months of this year, the most sought-after workers were those in their third year of experience. About 56 percent of total requests from recruiters were for workers with less than five years of experience.

Demand for workers with limited experience was the highest in technology R&D and marketing positions.

“As the competition in the global high-tech market has recently become fiercer than ever, Korean export companies are largely investing in research and development to stay competitive. The trend has boosted demand for quality, experienced talents in the local headhunting market,” said Choi Chang-ho, vice president of Job Korea. “In addition, in the years of low economic growth, demand in marketing and sales personnel has also gone up, as companies are trying to overcome their sales that are recently falling short.”

Another contributing factor to the increased hiring of younger workers is that recruiters now largely work online, where they are more likely to encounter less experienced workers. Online postings have expanded the age pool of workers hoping to find a new job.

And with higher worker turnover, Korean companies are more frequently turning to recruiters for help. Requests made to recruiters increased 28.7 percent in the first half of this year, compared to the same period last year, according Job Korea.

The electronics, electricity, IT solutions and telecommunication industries looked to recruit less experienced researchers and technicians, while retail and trade industries wanted the same level of experience for marketing employees.

Despite a positive economic outlook and continuous trade surplus records, such hiring trend stands out in most part of the private sector - with the exception of a few conglomerates with more than 1,000 employees. Korean companies still appear to suffer from the sluggish local economy.

According to a study by the Korea Employers Federation last month, of 407 member companies with at least 100 employees, only conglomerates with more than 1,000 workers increased their capacity for new hires, by an average of 0.3 percent. Groups with between 300 and 999 employees hired an average of 0.7 percent fewer new workers, and small and midsize companies reduced their new hires by 1.7 percent.

The survey found that 30 percent of Korean companies that said they do not plan to hire new workers this year cited the sluggish real economy as the main reason. Other reasons included personnel costs (21 percent) and a change in labor laws to expand employee benefits (20 percent).

The trend of preferring workers with a few years of experience to those who are either fresh out of college or veteran managers has been accelerated by higher turnover among junior-level employees.

“Korean workers started taking a more proactive approach in career management by voluntarily choosing to leave their job, instead of being removed during corporate restructuring, which has happened more frequently in unstable economic times since the Asian financial crisis of 1998,” Choi Na-eun, a researcher at LG Economic Research Institute, said in a report.

In the past, Korean recruiters preferred to handpick experienced workers through internal networks or temporary job openings, which were often closed to the public, and used headhunters only to hire high-level executives.

Human resources experts say that employees should find a headhunter who specializes in their industry or position even if they are not currently seeking a new job.

“Since securing talent has become important for companies, it is advantageous for workers to move to another company in the same field and to a similar position where they can demonstrate their capacity,” said Byun Ji-sung, manager at Job Korea. “Whether or not you are considering leaving your job, building and maintaining a close relationship with a recruiter helps workers stay updated about each industry, and it may help you find a better workplace match.”