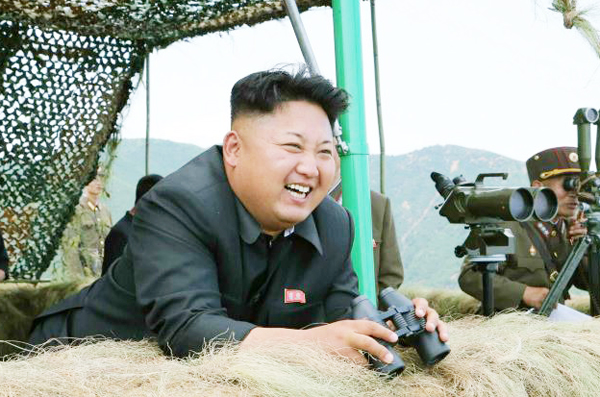 The Rodong Sinmun ran a photo yesterday of Kim Jong-un directing rocket launches from a site close to the South in an apparent act of defiance. [NEWS1]

North Korea showed detailed photos yesterday of Kim Jong-un directing rocket launches from a site close to the South in an apparent act of defiance.

The roar of rockets and the burning trails from the Soviet-era projectiles on Monday could be seen rising from clouds of smoke between mountains on the North Korean side, footage filmed by staff members at the observatory and obtained by Reuters showed.

It was not immediately clear why North Korea conducted drills so close to the border, but state media has in recent days called the presence of a U.S. Navy aircraft carrier in South Korea a “sinister interference.”

“They know South Korean officials will report their missile launches so they’ve decided to seize the initiative and announce it themselves,” said Michael Madden, an expert on the North Korean leadership.

North Korea routinely fires short-range missiles or rockets into waters off its east and west coasts, but state media rarely show Kim supervising drills so close to South Korea, and has only in recent weeks shown the young leader present at short-range ballistic missile and rocket launches.

Kim personally gave the order to launch the rocket barrage, according to the North’s main mouthpiece, the Rodong Sinmun, suggesting his growing confidence in executing actions that infuriate the South.

“North Korea fired from a position very close to the DMZ. It represents such a threat to South Korea that even our civilian tourists were able to witness columns of water caused by North Korean shells landing in the sea,” South Korean Defense Ministry spokesman Kim Min-seok said at a news briefing.

“Our government takes the firm stance that we will mercilessly retaliate if North Korea fires missiles or artillery south of the DMZ.”