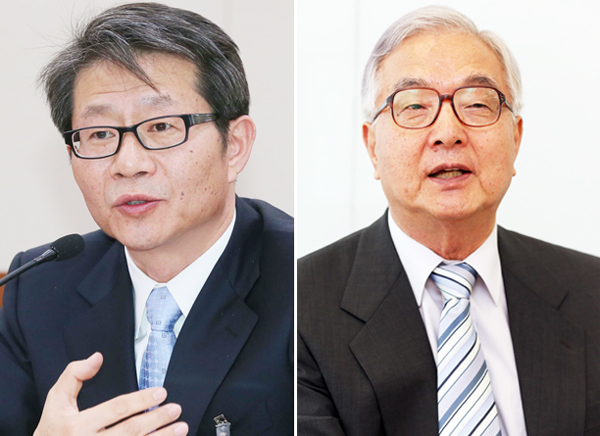 The Blue House yesterday released a list of specialists from the public and private sectors as it launched President Park Geun-hye’s 50-member committee to prepare for a peaceful unification of the Korean Peninsula.

The Presidential Committee for Unification Preparation is comprised of 30 experts from the private sector, two National Assembly representatives, 11 government officials and six heads of state-run research institutes, according to the Blue House.

Chaired by President Park, the committee will have four departments - diplomacy and security, economy, society and culture, and politics and legal system.

Chung Chong-wook, head of the China research center at Incheon National University, was tapped as one of two vice-chairmen for the committee, along with Minister of Unification Ryoo Kihl-jae. 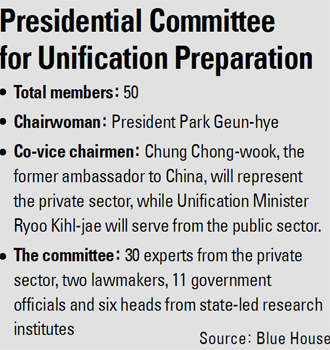 Unification Minister Ryoo had already been named so the attention yesterday focused on Chung as the civilian deputy head.

The committee will convene for the first time in early August to set up its goals and discuss a blueprint for its direction.

Chung, 74, served as Seoul’s ambassador to Beijing from 1996 to 1998. He also served President Kim Young-sam as a senior secretary for diplomatic and security affairs from 1993 to 1994. But he has worked more years as a professor at various schools, including Seoul National University.

“The governmental members, through cooperation with the civilian members, will present the future vision of a unified Korea and propose a concrete direction to prepare for unification,” said Ju Chul-ki, senior presidential secretary for foreign affairs, at a briefing yesterday.

“We will be collecting the opinions of all levels of society and conduct transparent unification discussions.”

Ju continued, “In order to set a blueprint for a unified Korean Peninsula, we have recruited people with excellent capabilities from the academic, social and economic sectors as well as civilian organizations.”

Ryoo will be joined by the ministers of finance, foreign affairs and defense, as well as the senior presidential foreign secretary and the National Security Council chief.

On the civilian side, the specialists will be divided into four sub-committees, according to their fields of expertise: foreign affairs and security, the economy, society and culture, and politics and legal affairs.

Chung drew special attention because of his role in the defection of Hwang Jang-yop, the architect of North Korea’s official state ideology of Juche, to South Korea in 1997.

They include Goh Kun, who served as prime minister from 1997 to 1998 in the Kim Young-sam and Kim Dae-jung administrations and from 2003 to 2004 under the Roh Moo-hyun administration.

Other members include Kim Sung-jae, professor at Yonsei University, who served as minister of culture and tourism under the Kim Dae-jung administration and former Foreign Minister Han Sung-joo, head of the Korean-American Association. He served as ambassador to the United States under the Roh government from 2003 to 2005.

The committee also includes Ko Yong-hwan, the first North Korean diplomat who defected to South Korea, who is a senior researcher with the Institute for National Security Strategy, and fellow defector Kim Young-hui, head of the North Korea Economic Research Department for the Korea Finance Corporation.

With the launch of the committee, Park is expected to give a detailed plan on realizing her Dresden Declaration and other ideas for unification of the two Koreas.

Park made a speech in the German city of Dresden in March during a Europe visit to outline a three-point agenda to lay the foundation for peaceful unification with the North: humanitarian outreach, co-prosperity and integration.

The Dresden Declaration served as a follow-up to her announcement earlier this year that unification would be a “jackpot” for South Korea, also translated as “bonanza,” in her New Year’s address.

The unification preparatory committee was initially expected to be launched in April.

However, it was delayed as the aftermath of the Sewol ferry disaster on April 16, which paralyzed domestic politics.

The presidential office also said that the committee will seek the opinions of advisers from civic groups, the media and academia on a regular basis.

Civic organizations and the general public have had mixed reactions in regards to the committee.

“The small and medium sized businesses will work towards having a new role in the era of a unification economy,” said the Korea Federation of Small and Medium Business in a statement yesterday.

However, some critics expressed concerns of a backlash from Pyongyang.